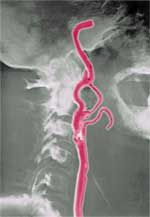 one of the most problematic substances in the human body is cholesterol. The steep rise in the number of people with heart ailments has made a villain of this key chemical, necessary for several bodily functions such as synthesis of bile acids and hormones. Cholesterol is both made within the body by the liver and absorbed from dietary sources. Needed for the various metabolic functions, it is sent across by the liver through carriers known as very low density lipoproteins ( vldl ) in the plasma to various parts of the body.

Once the cholesterol is deposited at its destination, vldl become ldl. The ldl often gets deposited on the walls of the arteries at the destination. The blood vessels therefore get clogged, causing disease conditions such as thrombosis and myocardial infarction.There are several ways of avoiding this condition; dietary control and exercise are among the most effective. But these are by no means easy. An easier option to check the accumulation of lipoproteins in the blood vessels is through drugs.

A small six-year-old company, GelTex Pharmaceutical from Waltham, Massachusetts, usa , has come up with CholestaGel, a drug that can reduce cholesterol levels. CholestaGel is a polymer that functions as a molecular net that simply dredges the cholesterol away from the body. The polymer does not bind the cholesterol directly but seizes onto the bile acids from the body. The liver secretes more drawing cholesterol out of the blood vessels further reducing the chances of clogging ( Scientific American , Vol 276, No 4).

CholestaGel is a safe drug simply because being a polymer, it is indigestible. It merely soaks up the unwan-ted chemicals and is removed from the body through the digestive tract. Other bile-binding drugs for reducing cholesterol are based on chemicals that often lead to bloating and constipation. Clinical trials have shown that even low doses of CholestaGel can clean up as much as 20 to 30 per cent of the cholesterol without causing bothersome symptoms to the intestines.

The need for such a drug is quite significant. According to the National Institute of Health, Bethesda, usa , there are eight million people in the us with a cholesterol problem serious enough to warrant drug treatment. The Americans spend about $6 billion annually on cholesterol-lowering drugs. The global demand for a cholesterol-reducing drug with no side effects would be huge.