How the roundworms became resistant to avermectin 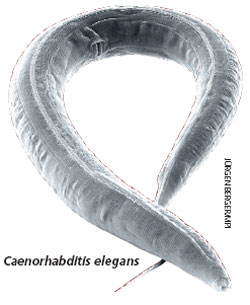 NEMATODES are one of the most difficult garden pests to control. These roundworms feed on plant roots and restrict the plant’s ability to absorb water and nutrients. They also cause various diseases in humans and animals. Usually, avermectin produced by Streptomyces avermitilis, a soil bacterium, is used as a pesticide and for treatment of nematodal diseases.

But nematodes have developed a resistance to avermectin, reasons for which are unknown. Now, scientists at Lewis-Sigler Institute for Integrative Genomics at Princeton University in the US have found why the resistance develops. They say a particular gene, known as GLC-1, is responsible. The resistance occurs due to deletion of the gene.

For their study the team compared laboratory-raised nematode Caenorhabditis elegans that had not developed avermectin resistance, to a resistant one captured from the Hawaiian islands. The researchers found that they could make the avermectin-resistant population drug-sensitive again by introducing the GLC-1 gene from the laboratory-raised nematodes. The scientists say avermectins affect certain regulatory channels on the nerve and muscle cells of C. elegans. The antibiotic binds to the neurotransmitter glutamate on the cell and closes the channels responsible for carrying out nerve impulses. This leads to paralysis of the nematode. In the resistant worms the binding site for glutamate is absent due to deletion of GLC-1 gene.

The researchers say the findings provide insights into genetic mechanisms by which organisms cope with environmental challenges and the possible evolution of drug resistance in pathogens. This could help devise better ways for their control.