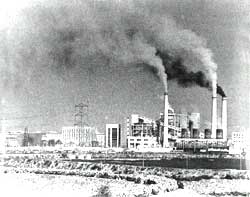 STUDIES carried out on newborns in the heavily polluted regions of Eastern Europe have given more cause for concern about the ill-effects of air pollution. At a recent conference in Budapest, organised by the American Association for Cancer Research, Frederica Perera of Columbia University, New York, announced that Polish babies exposed to high levels of pollutants, when in the womb, were born with small heads and bodies.

Along with her colleagues, Robin Whyatt, also from Columbia University and Wieslaw Jedrychowski of the University Medical School, Krakow, Poland, Perera studied umbilical cords of 163 babies from Krakow and Limanowe. The effect of chemicals like polycyclic aromatic hydrocarbons (pahs) -- which are produced when fuel burns -- on the dna of each child was observed. pahs can bind with dna to cause complexes or adducts which can cause mutations and also increase the risk of cancer. Babies with high content of pahs adducts were an average of 160 gm lighter and 1.04 cm shorter at birth. The circumference of their heads was also 0.95 cm smaller. Perera states that babies with small heads grow up with an impaired educational ability.