'Subsidise colas for use as pesticides' 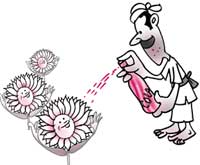 There is more bad news for cola giants. Two members of the legislative assembly (MLAs) in Andhra Pradesh have urged the government to provide these soft drinks at subsidised rates so that farmers can use them with pesticides to protect crops. Vouching for the efficacy of colas in driving away pests, Peddapuram legislator T Gopalakrishna told the District Development Review Committee meet, held recently in Kakinada in East Godavari district, that he had found encouraging results on spraying his pest-infested paddy crop with the cola-pesticide concoction. The pesticide didn't work alone, he added.

Sampara MLA Anisetty Buliabbayi Reddy supported Gopalakrishna's claim when some members at the meet voiced scepticism about its veracity. He said quite a few farmers have been using colas for the purpose and were satisfied with the results.

During the last cotton crop season, many farmers in Guntur, Adilabad, Anantapur and Mahboobnagar districts bought large plastic bottles of colas and used them on their crops. In September 2004, Nadikude, Pidugurala and Dachepalli towns in Guntur district's Palanadu region witnessed brisk selling of colas due to this reason. Most cola outlets in these places ran out of stock for some time and soft drink bottles were sold at a high price. Farmers also claim the colas don't have any side effects on crops!