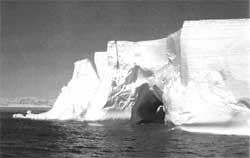 the collision of an asteroid with the Earth, responsible for creating a deep-sea crater off the southern coast of Chile, might have thrown life forms towards the South Pole 2.2 million years ago. For long, researchers have been trying to find out how marine life reached the dry valleys of Antarctica (New Scientist , Vol 156, No 2106).

In 1981, they discovered the impact site. But it was only in 1995 that researchers were able to collect the cores which spattered out from the so-called Eltanin impact structure in the Belingshausen Sea in Antarctica. After studying these cores, Ranier Gersonde of the Alfred Wegener Institute for Polar and Marine Research, Bremerhaven, Germany, has reached the conclusion that the cores are formed by a series of deposits covered by materials. These materials have been found to be slow-settling and finely grained.

According to him, nearly five per cent materials were in the form of unmelted asteroid fragments. During the process, researchers have found a fragment which has a diameter of five centimetres. Gersonde says that the chunk is the biggest fragment of a large-scale meteorite ever discovered.

The researcher believes that an asteroid nearly one kilometre across might have landed in the ocean basin. The basin is nearly five kilometres deep. The impact of the asteroid might have been so powerful that it would have led to a 20-km cavity in the water.

Calculations have shown that the impact might have generated ocean waves four kilometres high. During this process, sea water would have been thrown up into the atmosphere. Gersonde says that some of the water might also have reached the upper atmosphere.

The researcher postulates that the tsunami waves would have reached the Pacific coast. The height of these waves might have been 20 to 40 metres over deep water, and more than a kilometre at the coastline. He has found evidence that the impact made its mark in several locations around the same time. Some of the evidences stoutly support the disturbances in New Zealand and Australia.

Gersonde believes that impact rubble which survived during a course of time got settled to the ground. These places would have been the Dry Valleys of Antarctica. After conducting extensive studies of marine fossils in the dry areas, a team of researchers concludes that nearly 70 per cent of the Antarctica ice sheet melted during the warm spell of the Pliocene three to five million years ago.

Now, several researchers are conducting further studies of cores from the Eltanin impact site. It is expected to help explain a mystery surrounding the Chicxulub impact. This impact has been blamed for killing the dinosaurs. The impact site has been found with an iridium-rich layer, which consists of an unexplained iridium "halo" underneath. This has led to the assumption that the site might have been hit by two asteroids.