Some wildlifers resorted to outdated anthropology to stop the tribal forest rights bill. They failed 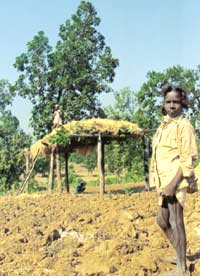 THE bill recognising forest rights of tribals has come through after sev-eral months of uncertainty. Its finalised draft, cleared by the Union ministry of law, is with the Union cabinet for approval and tabling in the winter session of Parliament. There is a possibility the Scheduled Tribes (Recognition of Forest Rights) Bill will get tabled in Parliament by the time you read this report. Some of the most con-tentious issues, it seems, have been settled in accordance with the demands of the Campaign for Survival and Dignity, a coalition of groups supporting land settlement of tribals tilling forestlands, as well as promises made in the National Common Minimum Programme of the United Progressive Alliance (UPA) government.

The bill will likely award tem-porary rights to tribals living inside protected areas (PA) -- especially national parks and wildlife sanctuaries -- for a period of two years, putting the onus of relocation and resettlement on the government. This issue was very contentious -- wildlife conservationists demanded no rights be allowed inside PAs, while the tribal rights campaigners wanted full land tenure in PAs.

The campaigners had demanded the rights on non-tribal forest dwellers also be settled in the same bill. This got sup-port from the Left parties. Intrigue set in when the Union ministry of environ-ment and forest (MoEF) also supported this as it would give it sway over the bill. The prime minister's office (PMO) inter-vened, saying the only ministry truly interested in the bill was the ministry of tribal affairs (MoTA). This meant the rights of non-tribals will not be settled, but MoEF, which steadily opposes giving up any forestland for rights settlement, was kept out.

As for the cut-off year for recogni-tion of 'encroachment' of forestland, it is likely to be 1980. The campaigners feel disappointed, pointing out it is well nigh impossible to establish the date of 'encroachment', adding this defeats the very purpose of the bill. They wanted either no cut-offs or, if any, 1993.

Trouble began soon after the PMO organised a meeting on January 19, 2005, giving MoTA the go-ahead to draft it. First, some wildlife con-servationists claimed it would destroy India's forests and the habitat of the tiger. Then, during a meeting held by the home minister Shivraj Patil, MoEF was asked to pre-pare its own draft. This cre-ated the impression the bill was a toss-up between the two ministries.

On September 30, PMO held an informal meeting to seek the views of those opposed to the bill and clear the air. Conservationist and tiger expert Valmik Thapar came with a note saying the bill was a bad idea, that it would destroy the egalitarian nature of tribal communities as it under-mined the fact that tribals owned land collectively, he argued. "The near feudal impacts of this bill would create more landless labour, lower castes and unparalleled class and caste wars much worse than what happened with the Mandal Commission," he wrote on October 21 in The Indian Express.

This created a sharp response,not only among tribal rights cam-paigners and middle-path conser-vationists but also academics -- historians and sociologists. Among those who submitted notes rebut-ting Thapar were conservation his-torians. Sociologist Nandini Sundar says the arguments used to 'defend' tribal interests by Thapar is an insult to sociology; much of the research used was outdated and from studies in the 1950s-60s.

On October 28, state minister in charge of PMO, Prithviraj Chavan, chaired a meeting of 22 repre-sentatives of varying ideological disposi-tions. He told all, including MoEF, to sub-mit their objections to the draft bill to MoTA. He made it clear the UPA govern-ment had a political commitment to the settlement of tribal rights, and that the bill had already got delayed too much. He said the government wanted to table the bill in Parliament's winter session.

On November 11, the representatives of the Indian Forest Service Association met the prime minister and submitted a list of sugges-tions. Their arguments echo what the MoEF and conserva-tionists have argued all along: that bene-fits should be extended to all forest dwellers, not just tribals, and national parks and sanctuaries should be exclud-ed from the bill's ambit. Furthermore, forest villages and other settlements within PAs should be settled outside.