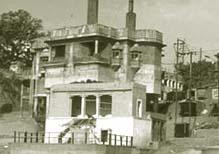 the Comptroller and Auditor General of India (cag) has criticised the Union ministry for environment and forests (mef) for its poor implementation of the Ganga Action Plan (gap). A recent audit review of gap reveals that the plan has met only 39 per cent of its primary sewage treatment target. "Phase-1 of the plan is not yet fully complete," stated the audit report. "The Union government had released a total of Rs 988 crore since gap 's inception, out of which the participating states have reported an expenditure of Rs 901.71 crore till March 2000."

gap was launched in 1985 and was to be completed by 1997. Its main task was to intercept and treat 873 million litres per day (mld) of wastewater from 25 cities. But more than 15 years after its launch, the river is still polluted and instead of improving, the water quality has deteriorated in all its parametres, according to the findings.

The cag report states that the mef has no mechanism to evaluate the estimations of sewage disposal by the participating states. It says that since September 1999, the ministry had stopped monitoring water quality, which is very important for technical evaluation of the plan's success. Audit checks indicate several cases of financial mismanagement such as funds diversion to unauthorised activities, which amounted to Rs 36.07 crore and incorrect reporting regarding an amount of Rs 6.75 crore. The audit also revealed many instances of administrative delays, faults in schemes, lack of research, bad contract management and poor maintenance of equipment. It stated that only 45 per cent of the grossly polluting industrial units had installed effluent treatment plants and over 18 per cent of these did not function properly. They did not even meet technical standards. Those units discharged industrial effluent of 2667.16 mld into the rivers. The National River Conservation Directorate (nrcd) which is the implementing authority of the project, had no mechanism to see that the installed plants functioned satisfactorily.

Another alarming fact revealed in the report was that the ministry did not fix any time schedule for submission of Detailed Project Reports, the basic document for expenditure sanction, from the states for phase-II of the plan, till the Supreme Court forced the issue. Even after the apex court's intervention, the ministry did not evolve a monitoring mechanism to ensure adherence by the states of the time-schedule prescription.

Even the non-core schemes of the plan were not accomplished. The aim of these schemes was to cater to the peripheral environmental concerns, having a bearing on the river pollution. The non-core schemes included projects such as construction of community toilets. The audit also revealed that Bihar Rajya Jal Parshad had transferred Rs 1.17 crore, allocated to the state for the plan's implementation, to its own account.