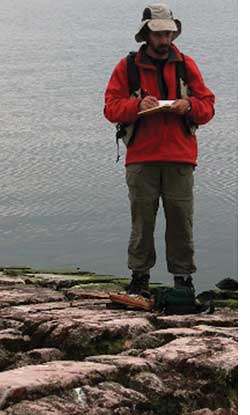 nickel an important constituent of batteries, stainless steelis found in deposits containing iron-nickel sulphide ores in the Earths crust. Geologists have confirmed that these rocks, some three billion years old, would not have formed if not for sulphur. The puzzling part was sulphurs origin. Neither the seawater nor the hot mantle has rich sulphur deposits. A research answers this question, opening the door for easy discovery of new ores.

Geologist Andrey Bekker and colleagues from the Geophysical Laboratory at the Carnegie Institute of Washington in usa, analyzed the suplhur content of greenstone belts of Western Australia and Canada. Initially it was believed that the sulphur came from the earths mantle but even the mantles content is too low to form such rich deposits.Using a series of techniques they found that the sulphur travelled a long way from volcanic eruptions to the atmosphere from where they entered the seawater, went down to the ocean floor and finally settled on the earths crust.

Evidence in the greenstone belts showed that sulphur-33 was preferentially incorporated in the deposits. If there is too much oxygen in the atmosphere sulphur-33 breaks down into products that are different from what the team found. Hence the presence of this isotope reveals the age of the parent rock. The ancient atmosphere was mainly anoxic. It is only 1.7 billion years ago that oxygen enriched the atmosphere. This data ties in with the fact that the nickel-rich rocks were formed in the ancient atmosphere.

Ore deposits are a tiny fraction of the Earths surface, yet economically very important. Society cannot exist without specialized metals and alloys, said Douglas Rumble at Carnegie and a co-author of the paper published in the November 20 issue of Science. This will help geologists track down new ores; the presence of sulphur determines if there is a deposit, he added.