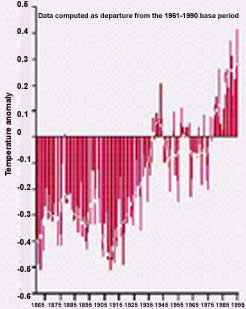 It was a year of surprises. Nineteen-ninety-five was the hottest year and showed an anomaly of 0.4c (average temperature of 1961-90 as base). The previous warmest year since 1961 was 1990, with an anomaly of 0.36c . Yet, the American continent suffered one of the cruellest winters, with blizzards and snow lashing large areas for days. Scientists held that this was an aberration triggered by the most serious of all environmental problems: global warming.

The prolonged El Nio southern oscillation (ENSO) warm episode that dominated 1991-94, ended in early 1995. A narrow band of the eastern equatorial Pacific is now cooler, indicating a weak cold episode ( La Nia ) condition, suggesting that 1996 will be a cooler year.

Regionally, parts of Siberia averaged more than 3C warmer than the 1961-1990 period, and many heat-related deaths occurred in both mid-west usa and India during the northern hemisphere summer.

The ozone hole, a feature of the Antarctic spring, began earlier and lasted longer than any previous year. Carbon dioxide and methane concentrations in the air increased in 1995 at their historical rates.