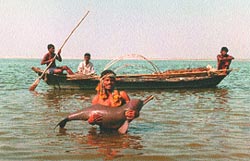 Wildlife conservationists realised recently that mapping the movements of dolphins could be a threat to national security! A project to survey dolphins in the Sunderbans region of West Bengal was reportedly cancelled by the state forest department (fd) after the Union ministry of defence denied the researchers permission to use global positioning systems (gps) for monitoring purposes. The project was to involve Pugmarks, an Indian non-governmental organisation (ngo), and two international agencies -- the Wild Life Conservation Society, and the Whale and Dolphin Conservation Society.

The ngos had sought permission to track the movement of dolphins from February 27 to March 18 this year. The fd initially informed the team that the Union ministry of defence had permitted continuation of the project with a provision not to use gps. According to Brian Smith, associate conservation zoologist of the Wild Life Conservation Society, the Union ministry of external affairs had also asked the researchers to obtain the approval of the education department.

But, Atanu Raha, field director of Sunderbans Bio-Sphere Reserve, says: "We did not get permission from Delhi to allow them to continue. The security of the foreigners was one of our concerns. Besides, the defence ministry did not allow them to use gps in the area. We approved the project only provisionally, but the final permission was not given."