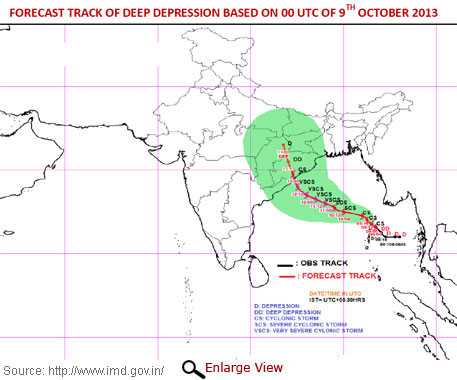 The Odisha government on Wednesday started stocking huge volumes of food grain and medicine at different places and asked the administration to put an alternative communication system in place as a cyclone with wind speed of up to 185 kmh was heading towards land.

The storm is expected to hit on Saturday. An alert has been sounded in 14 districts; these were ravaged by the super cyclone that hit the state in 1999.

“The deep depression over North Andaman Sea moved west-north-westward and crossed Andaman Islands near Mayabandar between 12.30 pm and 1.30 pm and lay-centred over east-central Bay of Bengal, about 950km south-east of Paradip,” Meteorological Centre, Bhubaneswar said on Wednesday evening.

The Met office said the system has intensified into a cyclonic storm named Phailin and will continue to move west-north-westward for some time and then north-westward and cross north Andhra Pradesh and Odisha coast between Kalingapatnam and Paradip by night of October 12 (Saturday) as a very severe cyclonic storm with a maximum sustained wind speed of 175-185 kmph.

Director of Bhubaneswar Met office, S C Sahu, said, “the system looks ominous. It crossed the Andaman with a wind speed reaching 60 to 70 kmph. But the atmospheric system is gaining strength from all directions over Bay of Bengal. The picture would be little clearer by Thursday evening.”

The Met office predicted heavy rainfall would occur at one or two places over Odisha during the next 24 hours. Distant cautionary signal number one (DC-I) was kept hoisted at Paradip and Gopalpur ports in Odisha while fishers who are in the deep sea have been advised to return to the coast immediately. The sea will turn rough to very rough after 12 hours.

Meanwhile, the state government has set up a 24-hour control room to keep a close watch on development and cancelled Durga Puja vacation of government employees in the 14 districts.

The meeting resolved to release water from all reservoirs, apprehending that heavy rain would occur under the influence of cyclonic storm. Six sluice gates were opened at Hirakud reservoir – the largest reservoir of the state.
National Disaster Response Force, Odisha Disaster Rapid Action Force, Fire Service and Odisha State Disaster Management Authority have also been alerted about intensification of the cyclone system. Moreover, rescue boats are being shifted to strategic positions in view of brewing cyclone over Bay of Bengal.

Odisha Chief Minister Navin Patnaik has, meanwhile, written to the Centre requesting it to instruct the armed forces to be on standby to help the state administration in rescue and relief operations. According to sources, experts have informed the state government that the cyclone would be a severe one. Its severity would be confirmed by Thursday evening. The India Meteorological Department forecast on vulnerabilities indicate that the communication systems in Odisha and Andhra Pradesh coast will be severely damaged. This is a major concern as communication plays a key role in evacuation and relief operations.