Superbug threat is for real

But Indian government does not think it is significant 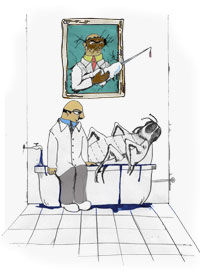 DRUG-resistant NDM-1 gene has been debated ever since India was identified a source of the gene in patients in the UK. The debate intensified on April 7, 2011, when the journal Lancet Infectious Disease published a paper which stated that the gene (New Delhi Metallo-betalactamase- 1) was found in tap water, rivulets and water pools in Delhi. The gene makes the microbe that carries it resistant to antibiotics.

“The study design cannot be doubted and the conclusions, at present, are acceptable,” says Chand Wattal, chairperson of the department of microbiology at Sir Ganga Ram Hospital in New Delhi. Wattal had examined urine samples of 804 pregnant women between 2004 and 2008. He did not find NDM-1 in any. This, he believes, is an indirect evidence that the gene is not prevalent in India. “Every study may not find it, but that does not mean it does not exist,” says Yatin Mehta, chairperson of the Medanta Institute of Critical Care and Anesthesiology in Gurgaon. “There is an immediate need to enforce stringent rules for use of antibiotics and monitoring our water quality,” he says.

On April 12, the Union Ministry of Health and Family Welfare released the National Policy for Containment of Antibiotic Resistance. But it also issued a statement, which says, “The fact that patients respond well to medical and post-surgical antibiotic treatment indicates that NDM-1 is not a significant problem in India” (see ‘We need not unduly worry about NDM-1’).

Commenting on the study Sandip Buddhiraja, director, Institute of Internal Medicine, Max Hospital, says, “It is surprising how samples in India were collected without approval from the authorities.” Researchers must take government’s permission before collecting water samples. Now, the Indian Council of Medical Research has been urged to conduct an independent study.