The world's most feared virus, Ebola, makes a comeback in Uganda 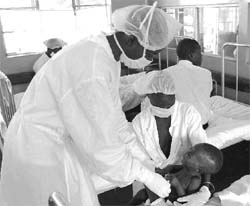 the Ebola filovirus, which left a trail of death and destruction in Zaire five years ago, has reappeared in Uganda. It has already claimed more than 40 lives. The virus is highly contagious and spreads through body fluids such as saliva, blood and mucus. Four days after exposure, flu-like symptoms set in, followed by diarrhoea and vomiting. After 10-15 days later, the victims "bleed out" through the nose, mouth and eyes.

Ebola is an incurable disease with a fatality rate of 90 per cent. "If influenza is a level 1 virus, aids a level 2, then Ebola is level 4 -- which means that there is nothing deadlier in encoded existence," says journalist Richard Preston in the book The Hot Zone (see 'What a bloody mess', Down To Earth , Vol 4, No 2, June 15, 1995).

"We still don't know what is going on, because information in the country filters in so slowly," says Matthew Lukwiya, medical superintendent at St Mary's Hospital, close to the town of Gulu. "But people are going to become more aware and I think we can expect many more cases in the next few days." The area has been quarantined and local people have been told to take precautions such as avoiding physical contact with people.

The presence of the virus can be confirmed only through sophisticated blood analysis, which requires special equipment. These are not available in Uganda. The country is poorly equipped to contain the disease as shortage of protective gear such as gowns, masks, boots and bags to bury the dead safely.

According to Preston, diseases such as Ebola and aids appear as a natural consequence of the ruin of the tropical biosphere. The emerging viruses are surfacing from ecologically damaged parts of the Earth. Many of them come from the edges of tropical rainforests. The rainforests are biodiversity reserves and all living things carry viruses. When they come out of an ecosystem, they tend to spread like what we are seeing with the Ebola virus, adds Preston.