Surprise rays from a comet 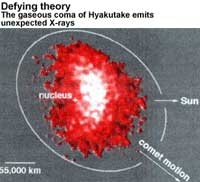 THE discovery of x-ray emission from the newest visitor to the realm of solar system on March 27: the Comet Hyakutake (pronounced yah-koo-tah- kay) by the German x-ray satellite called the Roentgen Satellite (ROSAT), has puzzled astrophysicists the world over. The comet was emitting x-rays in an unusual crescent pattern from its sunward side, about 30,000 km from its nucleus. The emission flickered on a time scale of hours and reached intensities roughly 100 times higher than what even the most optimistic theorists had predicted. In fact, some astronomers had even questioned the idea of pointing an x-ray telescope towards a comet: All of them are silent now. The observations were monitored and analysed at the Max Planck Institute for Extra Terrestrial Physics in Garching, Germany.

Cosmic radiations like x-rays are of very high frequency and hence, extremely energetic. They are generally associated with extremely hot gases that an exploding star ejects or with tremendously accelerating particles caught in the gravitational whirlpool of a superdense Neutron star or a Black Hole. Comets, on the other hand, are known to be rather benign objects mainly composed of ice and cold dust with generous sprinklings of carbon dioxide, methane and ammonia. Most comets hitherto observed, have emissions in the ultra-violet regions of the spectrum, which is way down compared to the x-rays in the energy ladder.

A team of astrophysicists from the Goddard Space Flight Centre in Greenbelt, Maryland, us soon joined hands with the German team. They have come up with two plausible explanations as to how the comet shows this spectacular emissions. As a comet approaches the sun, solar heating starts to vaporise the ices and the vapours alongwith the gases in the nucleus of the comet form a luminous sphere called the coma with high absorbing powers.

One hypothesis is that the solar x-rays The gaseous coma of Hyakutake emits unexpected are captured by the Xgaseous coma and -rays re-emitted by the excited molecules in a process called fluorescence in physics parlance.

The crescent shape of the x-ray spectrum, however, is ill explained by this theory which predicts a uniformly spherical shape. A second possibility, scientists say, is that the x-rays are being produced by violent collisions between the supersonic winds of particles and electrically charged gaseous molecules streaming out of the sun and the cometary atmosphere. Critics, however, point out that at the immense distance (from the sun) at which the measurements were carried out, the solar winds have little effect and the violent collisions would be too few and far between to explain the fluctuations in the signal spectrums. "I'm not sure that we know enough yet, but it sure is an enormous surprise", said Robert Petre, an x-ray astronomer from the Goddard Centre (Science, Vo1272, No 5259).