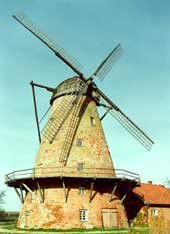 germany is aiming to produce 25 per cent windpower by 2030. To increase its current wind generation capacity, offshore wind parks in the Baltic and the North Seal have already been set up. According to environment minister Jrgen Trittin, the move to tap wind energy would not only make the supply sustainable but also reduce national carbon dioxide emissions by 10 per cent from 1998 levels. He adds that wind power provides an additional 35,000 jobs and "the industry will become self-supporting unlike the nuclear sector". A strategy is underway for solving the existing conservation and land-use conflicts which surround the development of offshore wind parks as well as speeding up the planning system. It is learnt that over 60 firms have already expressed an interest in permits to build wind turbines offshore.

While investing in wind energy, Germany intends to phase out nuclear power generation by 2030.