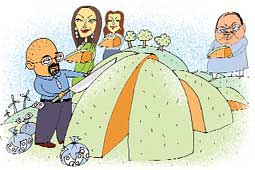 on june 10, the Maharashtra government ordered investigations into allegations that Suzlon Energy Ltd in Pune played foul with tribals of Dhule and Nandurbar districts. The order came after Opposition mla s alleged the turbine makers acquired land from tribals at cheap rates, Rs 250-300 crore, and sold it to celebrities at high prices totalling over Rs 5,000 crore.

Bollywood actors Aishwarya Rai and Twinkle Khanna and Samajwadi party leader Amar Singh, among others, figure in the celebrity list, media reports claimed. Opposition members also alleged the state government was party to the deal. Land rights activists supported these claims. "Suzlon acquired tribal land through a third party, at a throwaway price of Rs 25,000 per acre (0.4 hectare, ha).In most cases, tribals were not even aware of the land deals," said Pratibha Shinde of Lok Sangharsh Morcha, a non-profit.

Assuring action, Vinay Kore, state minister for non-conventional energy, claimed a committee headed by senior retired official would look into the allegations. He informed the Assembly the government was working on guidelines for land acquisition for windmill projects which would take into account interests of tribals and farmers.

Maharashtra's existing Renewable Energy Comprehensive Policy allows diversion of forestland for wind farms. Under this policy, Suzlon had got 340 ha forestland in Dhule. Tribals say it is theirs and covered by the Scheduled Tribes and Other Traditional Forest Dwellers (Recognition of Forest Rights) Act 2006 (see 'Fanning an alternative ', Down To Earth, Aug 15, 2008).

Suzlon termed all allegations baseless. Despite repeated attempts, company official Vivek Kher did not respond to Down To Earth. The company is the world's fifth largest wind turbine maker and has created an installed capacity of 650 MW in Dhule-Nandurbar region. Construction work is on to create the world's largest wind farm in Dhule with a total capacity of 1,000 MW.

Rough estimates indicated Suzlon has bought over 40,000 ha in 40 villages of the two districts at Rs 25,000 per acre; the market rate is Rs 5 lakh per acre. On June 1, activists and farmers stormed into Suzlon's wind farm in Dhule, forcing the company to switch off 140 turbines generating 350 MW. This was not a stray incident. In May last year, Chikhli villagers in Satara district forced Suzlon to shut down 41 turbines.

Inputs from Rajil Menon in Mumbai