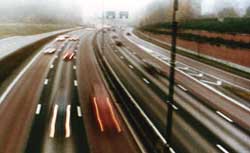 Kfont class='UCASE'>stockholm has replicated London's example by imposing a congestion tax on all vehicles entering some areas in the heart of the Swedish capital. The measure is proving successful in reducing traffic with the number of vehicles entering the city centre dropping by about a sixth.

The tax charged for driving into the demarcated zone is us $7.50 per entry. The charge is targeted at cutting traffic on the most heavily congested roads by 10-15 per cent. Cameras have been installed on roadsides to record the license numbers of vehicles, which enter and leave the demarcated zone.

According to political observers, the move by Swedish prime minister Goran Persson's Social Democrat minority government is aimed at winning the support of the Green Party in parliament. Social Democrat mayor Annika Billstrom pointed out that traffic jams cost society between us $780 million and us $1 billion a year, leading to higher consumer goods prices.

Though popular polls have slammed the new charge, it will remain in place till September 2006 when residents will vote on whether to make it permanent.

The scheme's introduction in London had also faced similar opposition but its residents have, nevertheless, adopted the us $14 a day charge per vehicle, which has reduced traffic volumes by 18 per cent. London is now set to double the area covered by its charging system in 2007.