A staple for many Asian and African nations, sweet potato is only now beginning to catch the attention of scientists 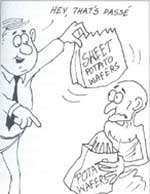 SWEET potato produces more biomass and nutrients per ha than any other food crop, but only now has it become the focus of sustained scientific research. Recognising its potential as a source of food, animal feed and industrial raw material, scientists around the world are now exploring its properties to produce improved varieties (Biotechnology and Development Monitor, No 18).

An ancient crop native to South America, sweet potato (Ipomoea batatas) is now grown in more than 100 countries. China produces some 80 per cent of the world's sweet potatoes, which form the staple in several other Asian and African countries.

However, sweet potato is susceptible to several fungal, bacterial and viral diseases and scientists are striving to produce disease-resistant varieties. Scientists at Tuskegee University in the US are trying to incorporate into the crop a gene for a protein, cercopin, from the giant silk moth, which has imparted resistance to fungal and bacterial infections in potato and tobacco.

The US agrochemical giant Monsanto and the University of Tuskegee plan to develop genetically engineered varieties of sweet potatoes that are resistant to the feather mottle virus, which causes russet crack disease, a big problem especially in Africa.

The sweet potato weevil is a major pest to which only a few of the thousands of crop varieties are resistant. The insect causes the maximum damage and in some places, may destroy 60-100 per cent of the crop. So, recently the British government contracted the British biotech company Agricultural Genetics Company to develop genetically engineered sweet potatoes resistant to the weevil. The research team will try and incorporate several genes that confer resistance to insects including those from the bacteria Bacillus thuringiensis.

Another genetic engineering approach to enhance the value of sweet potatoes is to increase its nutritive value. Though this tuber has a high rate of protein production, linked to extremely high yields, it is deficient in certain amino acids -- the building blocks of proteins. Scientists at Tuskegee are trying to incorporate synthetically produced genes into sweet potatoes to enhance their amino acid make-up.

In India, scientists have succeeded in storing sweet potato germplasm in tissue culture and at Nigeria's International Institute for Tropical Agriculture, scientists have developed methods to produce virus-free plants. Some research is also being undertaken in China, while Indonesian scientists have linked up with those at the Michigan State University in the US to try and genetically engineer sweet potatoes resistant to the sweet potato weevil.