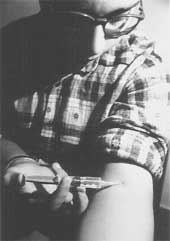 diabetes patients may not require to take painful insulin injections to regulate their blood sugar levels. Researchers at Eli Lilly & Co, usa , have developed a method so that patients would merely have to breathe insulin for it to reach the targeted part of the body. The process involves inhaling tiny drug molecules through the mouth that are then absorbed into the blood stream ( The Lancet , Vol 349, No 9066).

W Leigh Thompton, chief scientist at the company, says that the method would help nearly 140 million diabetes patients around the world. The technique is not new and has been widely used by asthma patients for delivering drugs in the body. Experts say that this method can send a drug in a patient's body more effectively. The technique would emerge as one of the most preferred mode of drug delivery for biotechnology products such as peptides and proteins, and medicines such as insulin.

Insulin can be effectively delivered in a body through the lungs. Unlike other tissues, lung tissue allows large molecules to pass through easily. In addition, the tissue does not have any protease that destroys proteins deposited on its surface.

Though the method is painless, there are some rough edges to this technique. Only a small part of the medicine can be delivered in the body using this process. So, it would cost more to deliver the same drug in a patient's body than injecting it.

When a drug is inhaled, only a fraction of it finds its way into the blood stream. The rest remains lodged either in the delivery device or the patient's throat. The devices used at present by asthma patients sends only about 5-10 per cent of the drug.

Such devices cannot be employed to deliver costly medicines like insulin. Now, several companies in the us are working on a technique so that the drug could be delivered in the patients in a powdered form rather than in tiny droplets. The idea envisages placing pre-measured dose in the device that blows the powder into a cloud of tiny particles. Patients would slowly breathe a drug so that it reaches their lungs.

Researchers are also working on a technique to improve the efficacy of the drug delivery system. It includes combining insulin with sugar molecules and make a powder. Whenever a patient inhales the power, it would break into a cloud of individual particles.

With the continuing research, drug delivery efficiency of new inhalation systems have improved. The method helps deliver 25-50 per cent of insulin. Clinical trials in the us and Australia have shown that insulin taken in this form gets rapidly absorbed into the blood stream.

Researchers are also trying to ensure that the new method delivers precise doses. This can be made possible by either placing a measured quantity in the delivery system or employing an electronic control system that monitors the delivered dosage as well as the patient's breathing.

Even if the new system delivers about 50 per cent of insulin, the process would cost twice as compared to injecting it. A team of researchers led by David Edwards at the Pennsylvania University, Philadelphia, usa , have recently developed an inhalable formulation of insulin that can remain effective for several days. They have used porous, spherical and biodegradable particles that once lodged in the lungs, carry out a steady and sustained release of the drug over the next 96 hours ( Science , Vol 276, No 5320).