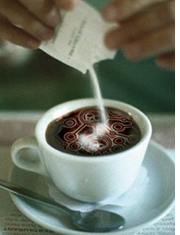 the sweetener industry seems to have its hands full with M orando Soffriti. Last year, the scientist and his colleagues from the from the European Ramazzini Foundation in Italy showed that aspartame causes cancer in rats. The industry trashed the findings saying the amount of chemicals used for the experiment was higher than what people usually get exposed to. Soffriti is back with more significant observations. A new study by a team of researchers led by him shows aspartame is harmful even in small doses--permitted by regulatory bodies. The chemical can affect newborn babies exposed through their mothers. Infants run a higher risk of cancer.

Aspartame is an artificial sweetener widely used in food products. The sweetener industry which has faced several incriminating studies, often retaliated by deriding laboratory inferences as inappropriate for 'real-life' situations.

The implications of Soffriti's new findings are considerable. Since a variety of products contain aspartame, it is easy for a person to consume more than the recommended amount, even while following an average diet. Children and pregnant and breast-feeding women are at the greatest danger. Soffriti's team suggests that the regulatory authorities need to re-evaluate safety. The study appeared in Environmental Health Perspectives (Vol 115, No 9).

The researchers studied aspartame which was made by food major Ajinomoto. The findings are contradictory to a study sponsored by it. A panel had recently given clean chit to aspartame.

The experiment began on the 12th day of pregnancy--the stage at which organs form and they are susceptible to cancer-causing substances. The rodents were observed till they died. They were then autopsied for cancer. The rats fed 2,000 ppm had lymphoma, leukaemia and mammary tumour. But even more significantly, the ones fed 400 ppm of aspartame showed malignancies resistant to treatment. It was also found that the rats exposed to the chemical before birth had a high chance of being affected by leukaemia.

The sweetener industry has criticized this study as well. "The study has been conducted on the same colony of laboratory animals which were used in the previous study. Replication of flawed data does not make the data any less flawed," says the International Sweeteners Association, Brussels, in a press release.