A toxic conduit into the body 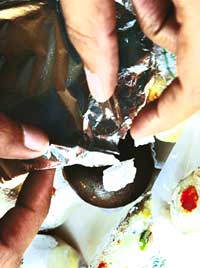 The presence of heavy metals in the foil is a health hazard. Exposure to nickel is known to lower body weight, damage the heart and the liver and also irritate the skin. Lead can disrupt the synthesis of haemoglobin, affect renal function, the gastrointestinal tract, joints, the reproductive system and the nervous system. It has also been linked to neuropsychological problems in children. "The average level of lead in foil samples is unacceptably high," says Thuppil Venkatesh, head of biochemistry and director of the National Lead Poisoning Centre at St John's Medical College in Bangalore. The maximum permissible limit of lead in water set by the World Health Organization (who) is 50 g per kilogramme, while the metal's average level in the samples was 6,000 times higher.

"The results justify the need to prescribe limits for metals that make up the 0.1 per cent in the silver foil, just like in other food commodities," says Mukul Das, one of the researchers who carried out the study. Silver of purity grade as high as 99.999 per cent is achievable but the process is expensive. The scientists, however, feel even 99.5 per cent silver grade could serve the purpose provided the remaining 0.5 per cent is made up from silver alloyable, safe filler metals such as iron, tin, zinc and copper. But even for these metals that are not considered a threat to health, there was a need to set safe limits.

The researchers question the necessity of using the foil at all though they admit that doing away with it altogether would need a change in public attitude. Like pfa, the Joint Expert Committee on Food Additives of who and the Food and Agriculture Organization also included silver in the list of food additives, but did not specify its composition. Even the European Council prescribes a minimum silver purity of 99.5 per cent, which leaves a margin of 5,000 ppm for contaminants.

The foil is made by putting a sheet of silver between sheets of bovine intestine tissue treated with chemicals and herbs to harden it. The silver sheet is made paper-thin by pounding on the tissue. The chemicals used to treat the tissue could be the source of the heavy metals in the foil.

The researchers say the fact that all the samples of the silver foil did not have high level of heavy metals suggests that there are some processes which are safer and could be followed. But foil making is a small-scale industry and manufacturers are unwilling to reveal their secrets. Metals like lead might get into the foil if old newspapers or printed waste paper is used to hold the foil instead of fresh paper. "We are sending this information to the regulatory bodies to see if these parameters could be laid down," says Das.