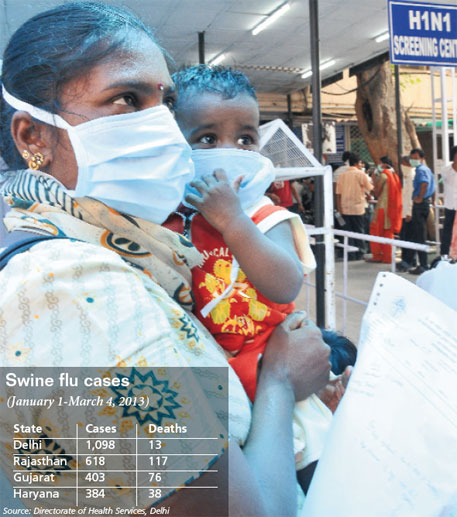 SWINE flu continues to bother the country in 2013. By the end of February it had claimed 310 lives. This is frightening considering 405 persons succumbed to the flu in 2012. While government has gone into an overdrive to reduce the number of cases, data from studies carried out by the All India Institute of Medical Sciences (AIIMS) in Delhi shows that there is no need to panic. The behaviour of the swine flu virus strain has become akin to seasonal influenza, say doctors. “Swine flu is behaving like any other seasonal flu, which is not new to the country,” says Randeep Guleria, professor of medicine at AIIMS. He puts down the increased number of swine flu cases this year to colder climatic conditions. “In all diseases there are lean periods, while there is an upsurge at other times. This year conditions have been relatively colder. Such environment is more conducive to viral spread.”

Since 2007 the number of people getting affected by all types of flu has remained the same. Sample tests by AIIMS in Delhi and Ballabhgarh show that the influenza virus affects six to 10 per cent of the population every year.

Before 2009, the year swine flu hit India, three strains of influenza virus were affecting the country’s population. These were influenza A H1N1, A H3N2 and influenza B. In 2009, another strain was discovered—A H1N1 (pdm) (pdm stands for pandemic). This strain had affected half of the population taken ill with the flu in 2009 (30 per cent) and 2010 (17 per cent). By 2011, however, the pdm strain disappeared, while strains A H3N2 and B made a comeback. This was due to vaccination and immunity the Indian population developed after the pandemic outbreak.

In 2012, from March till October, very few test samples showed H1N1 (pdm), while strain B dominated influenza. But after that pdm took over again. Till February this year it was found in nearly 80 per cent of those infected. “The rate of infected population was a more than four per cent last year. It is 5.3 per cent from October 2012 to February 2013,” says Lalit Dar, head of the microbiology department of AIIMS. Data shows the peak months for flu are February and March in winters and July and August in monsoons.

AIIMS doctors’ claims may not provide succor to the people suffering from swine flu. To reduce the spread of swine flu, the government has issued guidelines to states and nodal hospitals, asking them to provide isolated wards for swine flu patients and optimum medicine in time. “In Delhi, the government has notified 22 hospitals, 17 government and five private, for the treatment. These hospitals need to have ventilators and other requisites to treat swine flu patients,” says Charan Singh, nodal officer for swine flu in Directorate of Health Services in Delhi. The wards are not to be connected to the centralised airconditioner to avoid spread, he adds. Hospitals have maintained isolation wards but have failed to provide ventilator support. A relative of a patient in Guru Teg Bahadur Hospital in East Delhi, says, “We had to wait for two days for a ventilator.”

Another problem, says Dar, is that only notified chemists can sell medicines for swine flu. “The government has made sure that the drugs are not available over the counter otherwise people will develop antibiotic resistance.”