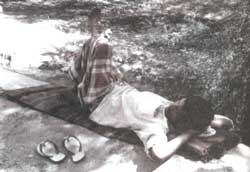 THE Oxford dictionary defines mood as the 'state of one's feelings or mind at a particular time'. For researchers looking at brain and behaviour, the relationship between change of moods to other physiological changes has always been a challenge, since any clue or significant association between them can help find solutions to certain behavioural disorders.

Researchers led by Diane B Boivin from the Harvard University School of Medicine and Brigham & Women's Hospital, Boston, USA, have reported that even small deviations in sleep schedules can trigger significant mood shifts in healthy individuals.

In addition to sleep, diurnal rhythms have been known to play an important role in the health and general well-being of people. Chronobiologists know that a person's sense of well-being primarily oscillates along with daily fluctuations in body temperature, hormone levels and other functions regulated by the brain's circadian clock. It is also known that mood varies according to the length of time a person has been awake, but the relationship is still not clear. Also, previous studies could not segregate such affects, according to Boivin (Archives of General Psychiatry, Vol 54, No 2).

The Harvard team asked 16 male and eight female volunteers to violate their normal 24.2 hour circadian rhythm by living in an isolation chamber with a 28-or 30-hour day for several weeks. Such isolation in a light-regulated environment is a standard method to evaluate the impact of disturbed circadian rhythm to enable scientists to study the impact of light and darkness on biological and psychological functions. Although we can adapt - our bodies reset our biological clock - after a short disturbance in time cycle like jet travel, such a large difference in day length is difficult to adjust. This 'forced desynchronisation' made it possible to gauge the effects of circadian and sleep-wake patterns separately.

The scientists found that the subjects' moods brightened or darkened during wakeful periods according to the difference between their natural and actual waking times. They felt worst between the sixth and 18th hour after waking on days when, according to their circadian clocks, they awoke late evening. "Good synchrony between your waking and your biological clock will allow higher mood levels," says Boivin.

Psychiatrists contend that there is a set point for happiness, a genetically determined mood level that the vagaries of life may nudge upward or downward but only for a while. With time, the grouchy tend to become as cranky as before, and the light-hearted, cheery again. Data collected over the years has also shown that mood and happiness are also unrelated to peoples' achievement in terms of a promotion or money say by winning a lottery, but they nearly always return to their set point in a short while. With the discovery of gene for happiness last year, geneticists have also tried to correlate and prove that at least half of our well-being is determined by lottery. The other half is from sorrows and pleasures of the last hours, days or weeks.

This heritability estimate on mood and happiness has been seriously questioned by others. Quoting data from the recent National Health and Nutrition Examination, US, which monitored reports of well-being of about 6,000 men and women for over 10 years, David T Lykken, a behavioural geneticist from the University of Minnesota, Minneapolis, differs. He says, "Be an experienced epicure. A steady diet of simple pleasures will keep you above your set point."

Boivin's study also shows that the relationship between well-being in terms of mood is complex and is strongly linked, among other things, to sleep. Sleep researchers consider this a significant study because it shows that mood is driven not solely by the clock or by the duration of wakefulness, but by a complex interaction between the two. As this study has essentially been done in healthy subjects, researchers at the National Institute of Mental Health (NIMH), Bethesda, US, are planning to take up similar studies on people suffering from manic depressive illness. According to Ellen Leibenluft, a psychiatrist with the NIMH, such a study should yield vital clues about their illness and even a road map for the manipulation of mood.