Switch on the window, please

Windows that change from clear to dark and back at the flick of a switch are set to make air-conditioning systems redundant in buildings, thereby saving considerable power. 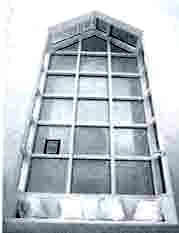 Enter the "smart" window: an insulated, multi-pane, electrically-controlled glazing that can be used to control the amount of light coming through and rejecting excess heat, thereby obviating the need for air-conditioning. Though most components of such a window are still laboratory prototypes, a few semi-intelligent glazings have already hit the market.

For windows that can be changed from clear to dark by using a switch, most research is concentrated on electrochromic glazings -- colour-coded, electrically controlled films. In addition to windows, electrochromic technology is being used in a wide range of applications, including automobile mirrors and sunroofs (Popular Science, Vol 243, No 1).

Though different companies use different types of materials that may be liquids, semi-solids or solids, most electrochromic devices look and operate in much the same way. They are essentially multiple layers of compounds such as indium tin oxide and tungsten oxide sandwiched between two conducting electrodes (positive and negative poles necessary for electric current to flow), enclosed in two sheets of glass. At least one layer changes from clear to dark when a current is passed through it.

The first commercial devices using switchable glazing are already in the market. Gentex Corp of the US makes organic-based electrochromic rearview mirrors that, once switched on, automatically darken in response to bright headlights or any glare. A Michigan-based company, Zeeland, is also working on switchable automobile windows and sunroofs. But most such films need to be replaced every 10 years or so, making their use in buildings rather expensive as their initial cost is also high. Says Zeeland director of electrochemical technology Harlan Byker, "For glass used in buildings, we need at least a 20-30 year lifetime."


Solid state devices built from thin films of electrochromic materials may be the key to sturdy glazing. "If you want longevity, stick with compounds that can withstand long exposure to sunlight, without breaking down," says Roland Goldner, director of Electro-optics Center in Massachusetts. In 1986, Goldner's team patented Smart Window glass, a switchable five-layer film less than a thousandth of a millimetre thick. Also ready to hit the market is Cloud Gel, a semisolid switchable glazing made from long strands of a special polymer mixed with water that is pressed between two plastic sheets.