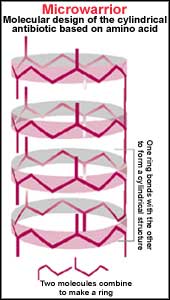 it is a battle of molecular proportions. The enemy: a minute harmful microbe. The weapon: protein fragments that self-assemble into 'nanotubes' (minute tube-like structures) in the cell membranes of the bacteria, poking holes through it to let the microbe's insides leak out. The result: the bug dies in less than a minute.

It is nothing ingenious. Just a replication of nature's ways. For example, the bacterium Bacillus brevis secretes a natural antibiotic called gramicidin, a weapon against microbial competitors. Two gramicidin molecules enter a competing microbe's membrane, hook up head to tail, and coil into a helix like a telephone cord. In effect, the pair 'drills' a hole that drains its victim of vital ions. Some moths also manufacture an antimicrobial compound called cecropin, which acts in a similar manner.

Researchers have now put such defending molecules to use. Gramicidin, for instance, is an active ingredient in some antibiotic ointments. But many of these molecules are too promiscuous, binding or inserting themselves into all kinds of membranes, making them dangerous. Efforts have been on to synthesise similar anti-microbial bodies that attack only harmful microbes and not human cells ( New Scientist , Vol 168, No 2267).

Reza Ghadiri, at the Scripps Research Institute in La Jolla, California, usa, has found the way out by redesigning the molecular structure of an anti-microbial chemical from a typical helical design into a cylinder. He uses two amino acids, each a mirror image of the other (so-called right and left-handed molecules) into a ring-like structure. He then stacks these to make perfect cylinders, drawn and held together by hydrogen bonds. Changing the number of amino acid molecules can vary the size of the cylinder and these 'nanotube' structures can be targeted to specific sites by carefully choosing specific amino acids. One such nanobiotic was used against Staphylococcus aureus , a bug that currently defies all but one antibiotic, vancomycin. The nanotubes were as effective as vanomycin. And these nanotubes work better than some existing remedies. Antibiotics work by slowing down the microbes, allowing the immune system to fight back. The nanobiotics, however, go straight for the kill, bleeding the bacteria to death.

Using the same principle, other versions of molecular rapiers have also been synthesised with different structures. Sam Gellman, chemist at the University of Wisconsin, usa, has used helices instead of stacks, using the so-called beta amino acids. These carry two carbon atoms in their centres, instead of only one in the case of alpha amino acids of natural proteins. The extra carbon atom makes the beta amino acids flexible and easier to contort into predetermined helical chains. Gellman's group tested the ability of these structures to form pores in four strains of bacteria, including two that were resistant to common antibiotics. The chains, which begin coiling even before reaching the membranes, work well and leave red blood cells untouched.

Nanobiotic chemicals enjoy another advantage. Unlike antibiotics that block crucial bacterial enzymes, nanotubes lodge themselves in the cell membrane. To develop resistance, the bacteria need to change not merely the shape of a single enzyme, but the structure of their entire membrane.

The danger experts see is that not too much is known about nanobiotics. In an experiment, chains similar to those developed by Gellman were added to both bacteria and red blood cells. The microbes died, but so did the human cells.