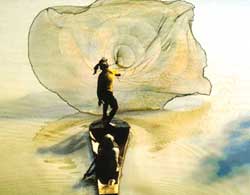 Another worthy cause has been lost to the number game. Almost 15 million fishworkers of the world suffered a blow when the 93rd annual conference of the International Labour Organisation (ilo) did not adopt a proposed Work in Fishing Convention (wfc) for the lack of a single vote that could have fulfilled the required quorum. wfc would have replaced seven ilo conventions, which cover a mere 10 per cent of workers employed in the fishing industry globally. It would have covered over 90 per cent of them. It aimed to improve the conditions for the majority of the world's fisherfolk, who live in developing countries and work with small vessels. wfc contained several provisions for them: rest hours, social security, minimum wage and written agreements with vessel owners.

The meet, which ended on June 16, 2005, saw the participation of over 3,000 delegates, comprising representatives of governments, employers and workers. Media reports claimed that wfc's undoing was opposition from employers, who abstained from voting. While 49 developing nations voted for wfc, four opposed it and 25 abstained (including major fish producers like India, China, Indonesia, Philippines and Sri Lanka).