Sadly, preserving Taj Mahal appeared to be the last thing on the authorities' mind when they allowed land reclamation work to continue for six months on the dried-up Yamuna riverbed right in the monument's backyard. They may actually end up scripting its epitaph, because experts fear that the monsoon-ravaged new embankment could weaken the very foundations of the Taj 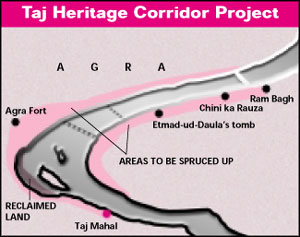 "Leaving aside the human lives, protection of Taj Mahal is of utmost priority."
-- Supreme Court in M C Mehta vs Union of India case on Taj Mahal

Sadly, preserving Taj Mahal appeared to be the last thing on the authorities' mind when they allowed land reclamation work to continue for six months on the dried-up Yamuna riverbed right in the monument's backyard. They may actually end up scripting its epitaph, because experts fear that the monsoon-ravaged new embankment could weaken the very foundations of the Taj.

The hectic activity, from December 2002 to June 2003, in the vicinity of India's biggest tourist attraction was in fact the groundwork for the Rs 175-crore Taj Heritage Corridor (thc) Project that proposed to give a facelift to the areas surrounding Agra's major monuments along the Yamuna. Included in the venture was a blueprint for a swanky shopping mall. The grandiose scheme, however, fell to pieces when it came under media scrutiny in mid-June 2003.

Even as the issue snowballed into a major controversy, both the Union and Uttar Pradesh (up) governments washed their hands of the matter. They would have us believe that the entire clandestine operation was the handiwork of one bureaucrat of up, who has since been suspended. But documents pertaining to the case tell a different story: while the state government tailored an environment plan to its needs, the Union government also turned a blind eye to the manoeuvrings. It has come to light that the project had got underway without any of the mandatory clearances. Furthermore, the work was in violation of several stipulations such as those imposed by the Supreme Court (sc).

As the dust settles, it is quite evident that not only were cultural and heritage issues cast aside to pave the way for the venture, environmental concerns too were ignored.
The thc plan was put forward by the Central Pollution Control Board (cpcb) and consultancy firm German Technical Cooperation (gtz) in 2001. It was part of a series of proposals collectively referred to as the 'Environment Management Plan -- Agra'. Under thc, the cpcb had conceptualised a heritage corridor covering five historical monuments, including Taj Mahal, Agra Fort, Ram Bagh, Etmad-ud-Daula's tomb and Chini ka Rauza. "While the scheme involved taking steps such as development of a green belt and landscaping, it was never once suggested that this should be done by reclaiming land from the riverbed," claims a cpcb official.

These plans, and others, were submitted to the Union ministry of environment and forests (moef) as well as local authorities in Agra. "Rules mandate that detailed project reports (dprs) should be prepared at this stage by the relevant departments in the state government. They should then be submitted to the moef, and funds sought under the Taj Protection Mission (tpm)," explains an environment ministry official. Jointly set up by the Union and up governments, tpm envisages improving the environment around the monuments through various projects. These schemes are administered by a body called the Mission Management Board (mmb).

For its part, the up government did not bother to submit the dprs. It dispensed with other procedures, too, and unilaterally decided to give the green light to the thc project. In November 2002, the then principal secretary (environment), R K Sharma, released a sum of Rs 17 crore for preliminary work. Sharma has been inexplicably singled out and suspended. Evidence suggests that the mmb was responsible for initiating the thc project (see box: Procedural lapses). It cleared the proposal in its August 2002 meeting, which was chaired by up chief secretary D S Bagga. Ironically, Bagga himself was later asked to conduct an inquiry into the matter by up chief minister (cm) Mayawati.

The first tranche of funds was released in November 2002 and work commenced in the very next month. The contract was awarded to the National Projects Construction Company (npcc), a public sector undertaking. "It is highly unlikely that Mayawati and Bagga were unaware of the goings-on," feels a senior official of the up government. This seems plausible because the money could not have been released without the finance department's consent, and the cm holds the finance portfolio.

After the issue came in the public gaze, the Union minister for culture and tourism, Jagmohan, instructed the Mayawati government to stop work on thc. "It is astounding that such a project was being executed so close to the complex," remarked Jagmohan.

Significantly, even the Archaeological Survey of India (asi) -- which comes under the Union ministry for culture and tourism -- is said to have stayed abreast of the developments. For their part, moef officials acknowledge that they did have an inkling of the events but claim that the details were divulged to them only recently.


On March 26, 2003, an application was filed in the sc in the M C Mehta versus Union of India case. It contended that the up government was diverting the flow of the Yamuna by reclaiming about 75 acres (30.4 hectares) of land between Agra Fort and Taj Mahal. The sc asked the cpcb to submit a report on the issue.

On April 7, the cpcb filed an affidavit asserting it had never suggested that the riverbed be filled up at the site. On the contrary, the board was of the view that construction at the spot could adversely affect the hydrology of the river, cause air pollution and alter the landscape of the region. On May 1, the sc ordered the up government to bring to a halt all construction activity at the site. Appallingly, the directive was complied with only a month and a half later when the media blew the lid off the matter.

"The controversy grabbed the headlines because it involved the prestigious Taj Mahal," opines K C Joshi, former director general of asi. He adds: "Thousands of other monuments in the country are in a shambles. Though laws to protect such structures do exist, they are not stringent enough."


"It shall be the duty of every citizen of India to value and preserve the rich heritage of our composite culture," states Article 51 A (F) of the Constitution. Its seventh schedule also empowers the Union and state governments to frame laws for the protection and upkeep of monuments. "The statute provides a wide scope in this regard," reveals Ritwick Dutta, a Delhi-based environmental lawyer. "Each state can have its own set of regulations," he adds.

Subject to the fulfilment of certain criteria, the Union government can declare a particular monument to be of national importance. The asi is in charge of preserving such structures at the central level. Currently, there are more than 3,500 structures in the asi's protected monuments' list.

Monuments of national and regional importance are governed by the Ancient and Historical Monuments and Archaeological Sites and Remains Act, 1958, and state legislations, respectively. The central act lays down guidelines relating to the siting of structures around protected monuments. It prohibits construction within 100 metres (m) of a protected monument and regulates activities within 300 m of the spot. "This rule is flouted time and again," points out Joshi, citing the case of Qutab Minar in Delhi. "There is an entire settlement within a few metres of the monument," he says.

Other experts concur with Joshi on the issue of the laws being toothless. "The 100 m or 300 m rule notwithstanding, no protection is provided to the areas surrounding a monument," alleges Ratish Nanda, a Delhi-based conservation architect. "In case of monuments like the Taj, the entire setting -- including the skyline -- is crucial for preserving the site's integrity. But the law is silent on this aspect," adds Nanda. He opines that even building bylaws need to be primed for the conservation of heritage complexes.

The example of Delhi's Jantar Mantar illustrates this point. Jantar Mantar is an astronomical observatory built by Jai Singh II of Jaipur in 1724. It houses a huge sundial and other instruments that can measure astral movements. The direct rays of the sun play a crucial role in the functioning of these devices. "In the 1980s, the New Delhi Municipal Council constructed its new multi-storeyed building near Jantar Mantar. The building's shadow fell on the monument and blocked the sunlight. As a result, the clocks stopped working," observes Joshi. "Today it stands as a mere sand and brick structure. We failed to preserve the symbol of ancient scientific progress," he laments.

Meanwhile, even as the Taj heritage corridor row is yet to die down, doubts are being expressed about how long the monument can continue to retain its World Heritage Site status. The United Nations Educational, Scientific and Cultural Organization's (unesco) office in New Delhi is reported to have apprised the World Heritage Centre (whc), Paris, of the details of the case.

According to the unesco's 'Convention Concerning the Protection of the World Cultural and Natural Heritage', member states should ensure that nothing interferes with the "authenticity and integrity of the site". India ratified the pact in 1977 and currently has more than 25 such sites.

It may be noted that in 1999, construction activity around Hampi in Karnataka had prompted the whc to include the monument in a list of endangered heritage sites. Is the Taj -- which is visited by about 5,000 tourists daily -- headed in the same direction?