Taken for a ride

Once again, the government has dithered from introducing clean technologies. The Union budget fails to provide a clear roadmap to promote electric vehicles, especially three-wheelers, while offering sops to make any car cheap 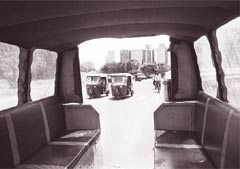 once again the government has dithered from introducing clean technologies. The Union budget fails to provide a clear road map to promote electric vehicles (evs), especially three-wheelers. It offers sops to make any car cheap, but wilfully ignores the need to extend special fiscal support to evs. Only cosmetic changes have been introduced: excise duty has been slashed from 16 per cent to eight per cent. Another carrot dangled by the Union government is a subsidy of Rs 80,000 offered on the institutional sales of electric three-wheelers. But customs duty -- the most contentious factor -- still remains high.

As a result, the nascent industry may soon die. At present there are only two players -- Lucknow-based Scooters India and Mumbai-based Mahindra Eco Mobiles. The latter has sold around 75 of its electric three-wheelers under the brand name Vikram ev. Mahindra Eco Mobiles has an upper hand with around 170 of its electric three-wheelers called Bijlee plying on the roads.

The industry is struggling hard to market its product. An electric three-wheeler costs exorbitantly more than its diesel counterpart. For instance, the cost of Vikram ev in Lucknow is Rs 2,27,665 as opposed to Rs 1,52,961, what a polluting diesel three-wheeler costs.

Customs duties make evs an expensive proposition. For instance, Bijlee's net dealer price is Rs 3,73,423. Imported parts account for at least 45 per cent of this value. Exceptionally high customs duty increases the components' cost by a whopping 62 per cent. Interestingly, in the case of vehicles running on compressed natural gas (cng), customs duty increases the cost of the imported components only by five per cent.

India has the advantage of learning from the experience of Nepal -- the first country to introduce electric three-wheelers on a large-scale in 1993. The initial launch of the three-wheelers called Safa tempos was a smooth-sailing ride. Excess electricity was available and adequate number of charging stations could be easily established. Starting from 1995, customs duty on the tempo's chassis, engine, motor, battery and battery charger was decreased to a mere one per cent. Moreover, the tempos were not required to pay the annual vehicle tax. As a result, they soon became quite popular among private operators.
At present around 635 Safa tempos are plying in Kathmandu. But operational glitches are making the buyers think twice about their decision. Batteries, which are one of the most crucial components of the tempos, are of inferior quality. They give a mileage of only 55 kilometres (kms) per recharge instead of lasting for 70 kms. Consequently, the operators have to change the batteries frequently -- after every 41,250 kms instead of 52,500 kms or more. This increases their operational costs.


Nepal's experience is very different from Taiwan's, where evs proved viable because of the introduction of better quality batteries. After using lead-based batteries and then nickel-metal hydride ones, the country has now switched over to lithium-based batteries.

For Nepal, which still imports batteries, such developments may be a far-fetched dream. "Domestic battery production itself will substantially bring down the cost," says Shanti Karanjit, office manager, Electric Vehicles' Association of Nepal.

Batteries of inferior quality mean frequent disposal, which poses serious environmental problems. "Currently we dump our battery waste in India. So battery disposal is not much of a problem," says Bhushan Tuladhar, executive director of Clean Energy Nepal, a non-governmental organisation (ngo) based in Kathmandu.

Another factor which works against the electric three-wheelers is the low operational costs of vehicles running on liquid petroleum gas (lpg) and diesel. "Pricing of fossil fuels decides the competitiveness of the vehicles. In Kathmandu, lpg and diesel are highly subsidised," says Tuladhar.

The entrepreneurs are lobbying hard to bring down the costs. "We are planning to open exclusive routes for the electric three-wheelers. Many supporters of evs are also demanding a reduction in the night-time tariff of electricity," says Tuladhar. "Tackling these vexing issues is not an easy task. Any initiative has to pass through a tedious bureaucratic ladder," adds Karanjit.

Clearly, if India is poised to promote evs, it would have to overcome the problems encountered in Kathmandu. As of now, the industry claims that the lifecycle cost of an electric three-wheeler is much less than its petrol-based counterpart. "Maintenance decides the life of a battery," asserts Manuj Gandhi, regional head (north), Mahindra Eco Mobiles. To pursue the customers, the company has introduced a leasing scheme. As per the scheme, instead of buying a battery, a vehicle owner pays a daily rent to a middleman. "Even we have worked on the principle to give batteries on lease," says N K Trivedi, director (technical) and chief operating officer, Scooters India.

Experts say it is crucial that disposal of batteries is driven by strong regulations. However, some question the futility of such laws considering that Nepal is dumping its battery waste in India. "There is a total ban on dumping of lead acid batteries. Hence the case of Nepal is obviously illegal. Similar activities are taking place in West Bengal, Gujarat and Tamil Nadu," admits a senior official of the Union ministry of environment and forests.


What might pose a big problem in India is the lack of adequate power supply. Generally off-peak power is used to recharge electric three-wheelers. But even at night, the power situation in places like Delhi is very poor. Considering this, the Supreme Court recently asked the state government to submit a status report on the power situation in the capital.

But the manufacturers are not dissuaded by such factors. "You just need to charge the vehicle for six to eight hours every day. Moreover, thanks to privatisation, the power fluctuations have gone down tremendously," says Gandhi. According to Nalineesh Sharma of Scooters India, the vehicles can be easily charged at home. Moreover, like Nepal, setting up of charging stations would not prove to be a Herculean task. Current gas stations can also be used.

But first and foremost what is required is the large-scale introduction of the three-wheelers by the government. At present, only institutes seem to be interested in purchasing them. The Rs 80,000 subsidy is a big incentive. Even organisations like the us Agency for International Development (usaid) are backing evs. The agency has started the India Zero Emissions Transportation (izet) Programme in Agra, whereby it is trying to promote evs with the help of the industry.

The three-wheelers can be included in the public transport system as they have more carrying capacity than the conventional vehicles. In New Delhi, for instance, a public-private (New Delhi Municipal Corporation and Mahindra Eco Mobiles) partnership is in place to run electric three-wheelers in the inner circle of Connaught Place. They are also plying in the Chandni Chowk area of Delhi. "We can easily drive the conventional three-wheelers out of the market if we get support from the corporates and the government," says an electric three-wheeler driver from Delhi. In fact, Delhi's transport minister, Ajay Maken recently waived off the sales tax on three-wheelers.

Similar measures have been taken in Uttaranchal, Andhra Pradesh and Rajasthan, where the state governments are trying hard to introduce these ecofriendly vehicles. The fiscal incentives are being used to woo the entrepreneurs. "Subsidies are a must to promote the vehicles," says Shreekant Gupta, professor at the Delhi School of Economics.

Stringent regulations would also help. In Pondicherry for instance, from the year 2000, new three-wheelers running on conventional fuels have been prohibited from applying for registration. Only electric three-wheelers qualify. At present, 20 three-wheelers are plying on the city's roads. They have also been exempted from road and sales tax. Easy availability of road permits is another incentive given to the buyers.

But the scenario is quite different in Lucknow -- the biggest market of such vehicles that accounts for the sale of 100 three-wheelers. Only limited number of road permits have been set aside for these vehicles. "Due to intense lobbying, we can issue only a few permits," says Jia Lal, additional commissioner, transport department of Uttar Pradesh. According to R Arockiasamy, professor (emeritus) Indian Institute of Technology, New Delhi, the promotion of evs is hampered by the vested interest of the conventional fuel industry.

Even in Delhi, the same factors hinder the large-scale launch of the three-wheelers. "We are not planning to introduce the three-wheelers in the public transport system as we have not received any proposal from the concerned agencies," says a senior officer of the Delhi Transport Corporation.

If such a lax attitude persists, then we would never be able to meet the clean air goals by introducing clean technologies. Clearly it is time that the government charges itself up and makes efforts to provide a breath of fresh air to the public.