Taking science out of the lab

With science communicators reading out drab and dull power-point presentations, the Indian Science Congress could better emulate the ‘Chai and Why’ model 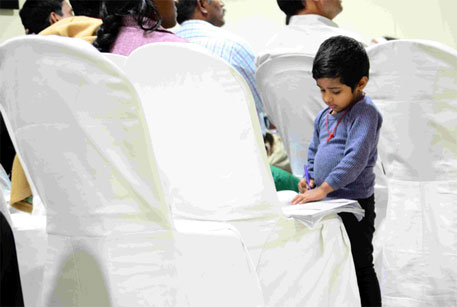 Students sitting on the stairs to discuss and debate would be a normal scene in any university. More so, if the University is hosting the 100th Indian Science Congress, which is being attended by scholars, students and researchers from all over the country. But sadly, at the Techno India University campus in Kolkata, the venue for the concluding session of Science Communicators Meet, one is not allowed to sit on the stairs and gossip, leave aside discuss science. Unless one is as adamant as Arnab Bhattacharya, a physics professor from Mumbai’s Tata Institute of Fundamental Research (TIFR).

In an otherwise dull and drab meet, replete with jargons and researchers reading out power point presentations, Bhattacharya brought to life, in a brief 10 minutes, how to take science out the lab, to make the common man and students curious about the latest scientific developments.

When this correspondent asked Bhattacharya for a brief interview, he promised to step out if the next speaker “is boring”. We headed for the stairs soon after with a young student from Andhra Pradesh following us. Then came a handful of security guards and a couple of the organizers asking us not to sit on the stairs, we could stand and talk or could move inside the air conditioned lobby of the swanky private university. Bhattacharya would have none of it, and claimed his right as a scholar to sit on the stairs and talk. The party poopers gave up after some time.

“For a long time I had toyed with the idea of a science café to get the common man excited and talking,” says Bhattacharya. The idea took shape with “Chai and Why” sessions where anyone can walk in—engaging them to ask questions—after a brief talk by a scientist followed by lengthy discussions. The science outreach programme of TIFR collaborated with the famous Prithvi theatre, using the theatre premises as the venue. Two Sundays every month, someone from TIFR shares a scientific story followed by Q&A’s over a cup of tea. From 2009 till date, 90 “Chai and Why” sessions have been conducted.

The topics of discussion are carefully selected—topical news or what kids would love. Take for instance, the session at the height of the 2G controversy in July, 2011. It invited the public with the following lines: “we are hooked to our mobile phones—talking, texting, browsing, tweeting, clicking, gaming—many of us just cannot live without them. The underlying technologies termed 2G/3G are much in news today (for good and bad reasons). But what is 2G, 3G and the impending 4G? What principles underline these technologies? Where is wireless communications headed? Come and find out!” Of course, over a cup of tea. 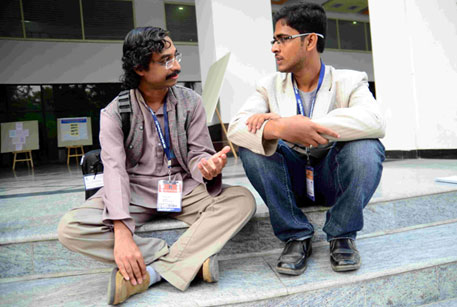 “Chai and Why” sessions have dealt with the latest in science which would otherwise be too complex for the common man. A session titled “the big bang and the little bang” discussed the creation of the universe. “The big bang created the universe… will the little bang in the laboratory destroy it? How to create temperatures millions of times higher than at the centre of the sun? Let’s discuss the hot stuff…”

A session titled “God particle and the invisible universe” discussed the path-breaking Hadron Collider Project where Indian scientists are participating and which is creating inside the lab, conditions that existed at the beginning of time.

A catchy title and topical news always helps, says Bhattacharya. Like “2G, 3G, 4G- yeh kya hai ji?” on wireless communications, “suck, squeeze, bang, blow” on the science of jet engines, and “why this Cola very di?” on the science of carbonated drinks. To get young students involved, sessions were conducted on “origami and mathematics” as a hands-on exercise, and “science in the bathroom”, discussing soap bubbles, shampoos and the wet side of life. 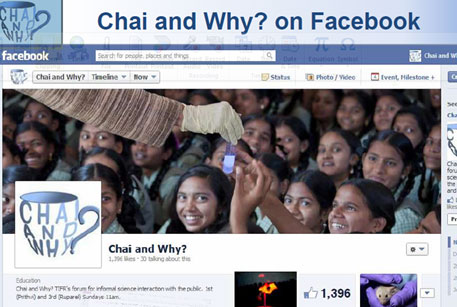 Bhattacharya informs that “Chai and Why” is now travelling to rural Maharashtra in vernacular. A Facebook page puts up links to the videos and invites for upcoming sessions. The unique initiative is to fight the feeling that science is “boring” and demonstrate how science and technology underpin societal progress. “It’s a small attempt at putting the fun into fundamental research.”

The Science Communicators Meet at the Indian Science Congress attempts something similar to that of Chai and Why—that of bringing the latest in science and technology to the common man. But only a handful of the 20 oral presentations could be comprehended—let alone interest the lay audience. But that did not stop the organizers from congratulating themselves on its success with a few customary platitudes like “de-jargonize scientific research” thrown in.