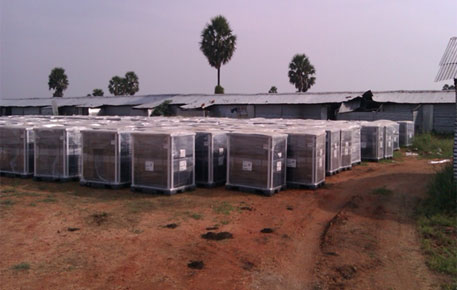 Tamil Nadu has recently launched one of the most ambitious solar policies by any state in the country. It has mandated that all high tension consumers source six per cent of their energy usage from solar power by January 2014 through a Solar Purchase Obligation (SPO). High tension users are those that are connected directly to a high tension line with a voltage of over 33,000 volts or 33 kV. This includes large industries, special economic zones, colleges, residential schools and buildings with a built-up area of over 20,000 square metres. Domestic users, agriculture and other low tension consumers would be excluded from the SPO.

The six per cent SPO will help the state harness 3,000 MW of total solar power by 2015. The stated reason for the solar policy is to increase supply of electricity in the state as coal reserves are dwindling and becoming increasingly expensive. The policy notes that conventional power is not able to keep up with increasing electricity demand. Tamil Nadu already has the highest wind-power capacity among Indian states and the policy reasons that the production curve of solar, which is more predictable than wind, can help stabilise the grid. While wind-power performs best in monsoon season when wind-speeds are high, solar performs best in non-monsoon season when solar insolation is high. Solar potential is also more evenly spread over the state.

The policy further argues that solar plants near the consumer (on rooftop or on the site) would drastically reduce transmission and distribution losses and solar power is the cleanest way to produce electricity, along with wind-power.

According to Mohit Anand, senior consultant at Bridge to India, a solar power consultancy based in India, "The reason to put the obligation on high tension consumers is that they are already paying high electricity tariffs and have the ability to pay for solar. It would be economically unviable for the domestic or agriculture low tension consumers who pay lower rates to use solar power. Putting the requirement directly on them (low tension consumers) would make little sense as there is no infrastructure for enforcing a solar requirement for each and every household in Tamil Nadu."

But not everyone is in awe of the policy. “Tamil Nadu has put out this policy which is very ambitious, 3,000 MW in three years, but it is also very vague. There doesn't seem to have gone that much thought into the process. Andhra, Kerala and other states have done the same; they want solar but aren't specific on details," says Ashwin Gambhir, senior research associate at Prayas Energy Group in Pune, a non-governmental energy think-tank.

Moreover, enforcement of SPO is so far undecided. According to sources in the Tamil Nadu Electricity Regulatory Commission (TNERC), the commission in charge of regulating tariffs and enforcement as per the policy, “the commission is in discussions with TEDA (Tamil Nadu Energy Development Agency) regarding enforcement of the SPOs. The feed-in-tariffs are also under consideration for grid connected projects." The commission sources have declined to give a deadline on the regulations or to give any details of how enforcement will be done but state that "they will be out in time".

But with only 15 months between now and when the six per cent SPO kicks in some question the tight deadlines: “If they can't enforce it then what will it (the SPO) be worth to the market? Nothing. Until there is clarity on how those who don't fulfill the six per cent solar power requirement will be penalised no industry will go ahead and begin construction, it wouldn't make sense to the industries financially,” says Anand of Bridge to India. The first solar PV projects of 5 MW each, totalling 140 MW, set up under the National Solar Mission have taken between 12 to 15 months on average to complete.

High tension consumers can fulfill their SPO either by producing the solar electricity themselves from rooftop solar panels or ground-based solar plants, running on photovoltaic or concentrated thermal solar power technologies; by buying it from Tamil Nadu Generation and Distribution Company Limited (TANGEDCO); or by buying solar specific renewable energy certificates (RECs). An REC represents buying the environmentally friendly part of 1 MWh (1MWh = 1,000 units) of solar power. The solar RECs are traded at two energy exchanges in India and stood at a price of around Rs 12,500/MWh last month.

A Generation Based Incentive (GBI) is to be given by the state to consumers generating solar from rooftop installations. A GBI gives an added incentive on top of the price that TANGEDCO would pay to purchase the power generated by the rooftop solar installation and has been given before to the wind power producers. The GBI is set at Rs 2/KWh for the first two years, Rs 1/KWh for the third and fourth year and Rs 50 paise for the fifth and sixth year. According to Gambhir, "rooftop installations would need meters to feed into the grid but the policy does not go into how this is to be done technically. It would need Central Electricity Authority (CEA) standards to be set". But the Authority has failed to evolve any standard on metering and grid interactive systems for solar rooftops so far. The standards are under formulation for two-and-half year, according to sources in the Ministry of New and Renewable Energy.

According to TANGEDCO the projected energy sales to high tension consumers between 2012 and 2013 will be 22,101 Gigawatt hour (1 GWh = 1 million units) which is 1/3rd of total energy sales in the state. A six per cent SPO in Tamil Nadu would therefore be about 1,326 GWh per annum. In comparison, the total production of solar electricity for India in June 2012 was 115 GWh, according to CEA (most of this from Gujarat and Rajasthan). Moreover, to fulfill the SPO demand, the state would have to install, or source, about the same amount of solar that is already installed in India—1,326 GWh per annum would need a capacity of about 800 MW of solar power.

The nation as a whole has a solar specific Renewable Purchase Obligation (RPO ) of 0.25 per cent of total electricity supply per state by 2013 and 3 per cent by 2022. While the Tamil Nadu SPO would land the state as a whole at about 2 per cent solar powered by 2014 and putting the state far ahead of schedule. The longer vision of the policy is to have 3,000 MW of installed capacity by 2015.

Most states have so far gone for policies where a certain capacity is reverse-auctioned off to the bidder giving the lowest rupees per KWh price for the state power utility to buy the power at. Many state power utilities are however facing massive financial losses and are unable to pay for the more expensive solar power. TANGEDCO is one of these, with an expected outstanding debt of Rs 54,000 crore by the end of 2011-12. Unable to pay even the relatively cheaper wind power, it would have been very hard for TANGEDCO to pay for solar power as well, which is double the price of their normal power purchase cost.

“Why developers would go set up solar in a state where the utility is broke and haven't paid wind-power producers for a year is beyond me,” says Gambhir. With the burden instead placed on the high tension consumer who already pay between Rs 4.5 and Rs 9 per kWh, the cost of solar (at about Rs 7 to Rs 9 per KWh for large installations) would not be a massive change. However, with solar power the full brunt of the cost comes at installation point which, if the time limit is to be held, would have to be within the next 14 months. The cost of a solar power plant, depending on size, technology and placement, comes to about Rs 8 to Rs 15 crore per MW. Tamil Nadu's high tension consumers would, therefore, bear a cost of between Rs 6,400 to 12,000 crore in the next year.

With the burden placed on consumers, TANGEDCO could still set up solar parks, as stated in the solar policy, and use reverse bidding to achieve a low tariff, and they would be able to sell this power at the arrived at price to high tension consumers not able to produce their own solar power.