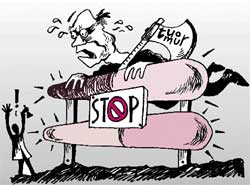 among the novel methods of combating cancer are some drugs that fight the disease by blocking blood supply to the cancerous cells. These drugs stop angiogenesis -- the process by which new blood capillaries grow to augment blood supply to growing tissues like tumours. Two new substances have been identified by Michael O'Reilly and his team from the Children's Hospital, Harvard Medical School in Boston, us, that prevent the endothelial cells, which line the walls of capillaries, from multiplying (Nature Medicine, Vol 2, No 6).

Malignant tumours are like revolting soldiers -- undisciplined and dangerous, refusing to obey any of the rules of normal, organised and disciplined cellular growth. Arresting this unregulated growth has been the objective of all cancer therapies. Anti-cancer drugs prevent such proliferation by stopping the division of cancerous cells, but in the process they also tend to arrest the growth of normal cells. Not surprisingly, bone marrow, hair follicles and the gut are seriously affected in people undergoing chemotherapy.

The inhibition of angiogenesis is currently considered one of the hottest areas in cancer biology, offering new hopes of cancer treatment. As many as nine drugs are undergoing clinical trials in various stages of development. O'Reilly's group is concentrating on angiostatin and endostatin, two very promising drugs. So far, trials have shown that these drugs can decimate tumours (at least in mice). More importantly, they also seem to play an important role in keeping at bay the so-called secondary cancers, often considered more lethal than primary tumours.

Secondary tumours erupt in the body through a process called metastasis, which occurs when the proliferating cancer cells go beyond simple over-breeding. Once metastasis starts in the body of a cancer patient, it is nearly always fatal. This is because a single tumour can either be excised by surgery or decimated through radiation; secondary tumours, however, are too numerous and spread out to be dealt with by any of the conventional anti-cancer therapies.

O'Reilly found this out while investigating how primary tumours manage to do this marvellous job. His premise was that primary tumours secrete some 'suppressor' substances of their own to keep secondary tumours at bay. To check this hypothesis, the Harvard group implanted a cancer called Lewis lung carcinoma into mice. Mice with the Lewis cancer cells did not initially develop secondary cancers. However, when these cells were removed, the secondary cancers quickly made their appearance.

O'Reilly's team first extracted such suppressor substances from the urine of the mice along with Lewis cells. The purified proteins were injected separately into mice in which the transplanted Lewis cancer cells had been removed. The protein extract was able to check the spread of secondary tumours.

Angiostatin and endostatin work quite well on their own; but together they form an even more potent anti-tumour combination. However, it is not clear as to how exactly these molecules work although their mode of action is by stopping the endothelial cells from spawning new blood vessels. Both the molecules are obviously fragments of larger proteins that serve other functions in endothelial cells. Angiostatin is made from one of the proteins that causes the blood to clot. Endostatin is derived from collagen, a protein that helps the walls of blood vessels to hold together and also gives them the elasticity.

Why there is a need for the tumour cells to create these molecules that prevent their spread in the body is still a mystery.

Scientists are also trying to understand how angiostatin and endostatin communicate with the cells, as the signalling mechanisms of angiogenesis promoting the formation of new blood vessels and thus tumour growth are far stronger.