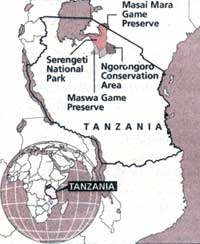 The details of tracking down of the canine distemper disease that broke out among the lion population in, the Serengeti National Park, (Down To Earth, Vol 4, No 16) were recently made public. If it would not have been . for some smart sleuthing by medical experts, the killer disease would have wreaked havoc among the lion population of the region. A group of tourists first came across lions having convulsions in early 1994 and informed a wildlife veterinarian, Melody, E Roelke-Parker, who sent samples fiom dead, sick and apparently li@althy lions, to laboritories around the world. It was the first time that the disease had broken out on an epidemic scale in the wild. Max J G Appel, a pathologist and canine distemper virus expert at Cornell University's College of Veterinary Medicine, us, finally confirmed the identity of the virus.