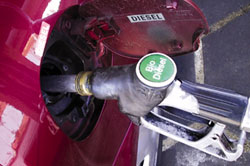 The biodiesel industry is obviously peeved. Since its introduction in 1993, the use of biodiesel has been increasing substantially each year. Data shows that in 2004, biodiesel was of any importance among alternative fuels in Germany. Interestingly, it was very close to meeting its 2 per cent target for biofuel, based on energy content, as per a European Union directive.

The obvious fall out of such high consumption of biodiesel was that the government was losing between us $1.06 billion to us $1.19 billion a year in tax revenues on conventional diesel.