TB and respiratory disorders have increased in Bellary: CAG report

Country's chief auditor calls for a comprehensive study on impact of mining on people, livelihood before grant of leases 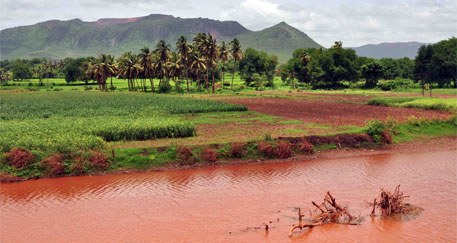 An audit report for 2011-12, published by the Comptroller and Auditor General (CAG) of India, on the impacts of indiscriminate iron ore mining in Karnataka’s Bellary district has revealed increasing incidence of diseases like tuberculosis (TB) and other respiratory disorders among local communities. Mining has also adversely impacted livestock population and area under cultivation and irrigation.

The report—Controls and System for Sustainable Mining in Karnataka—has noted that mining has caused high levels of air pollution. This observation was based on the air quality data for 2007-2010 provided by the Karnataka State Pollution Control Board. The levels of respirable suspended particulate matter (RSPM) and suspended particulate matter (SPM)—two pollution indicators—have increased considerably in the three talukas in Bellary district. RSPM levels range between 103 to 1,119 micro gram/ cubic metre (µg/m3) while SPM levels ranged between 201 and 1,195 µg/m3. The permissible limits for RSPM and SPM are 100 µg/m3 and 200 µg/m3.

Mining has a severe impact on the livestock, too, says the report. The 18th Census of livestock conducted in 2007 by the district animal husbandry department has registered a fall in the growth rate of the populations of cattle compared to the 17th survey conducted in 2003. The reasons were decrease in availability of grazing land due to mining, nutritional deficiency disorders due to non-availability of quality fodder, high manganese content in water and soil, contamination of water sources and fodder with toxic material used during mining and increased susceptibility to diseases of respiratory, digestive and reproductive systems, notes the report.

The CAG report further notes that area under farming has declined in Bellary taluk. This taluk had 479,188 hectares (ha) under different crops in 2006. But the cultivated area reduced to 436,067 ha in 2010. Consequently, the area of barren land increased to 124,157 ha. A total of 2,948 ha of land in Bellary, Sandur and Hospet have become uncultivable and crops in 8,345 ha have suffered a loss. The reason was dust of iron ore deposited over the fields and crops. This in turn affected the photosynthesis process, leading to growth retardation. Digging for iron ore and dumping of ore and waste in the fields has resulted in loss of fertile top soil and changes in land structure, making it unfit for cultivation. The CAG report notes that the area of irrigated land has declined from 2,324.80 ha in 2001-02 to 2,192.51 ha in 2010-11.

Land encroachments
As directed by the Supreme Court in 2011, a survey had been conducted to find out the extent of encroachments in forestland and also outside the mining lease area. The survey was conducted by the National Institute of Technology, Suratkal. According to the CAG report, the survey has revealed encroachment of 1,606.91 ha by 166 lease holders. Between 2008-10, mining companies encroached 931. 58 ha of forestland.

In the process of auditing, CAG has observed that though a committee was formed by the state government in 2009 for implementing and monitoring the Karnataka Mineral Policy ( KMP 2008), no time-bound action plan was formulated even after three years. Likewise, though the state was empowered to formulate rules for preventing illegal mining, transportation of storage illegally-mines ore, these were not formed till April 2011. This has caused a huge loss to the exchequer.

The report has recommended to the government that no mining lease should be granted before holding a comprehensive study involving local people on the impact of mining on life, lifestyle and livelihoods of the communities living in the mining areas.