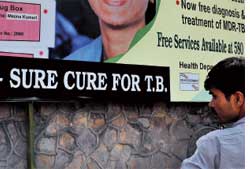 tuberculosis is a common and deadly disease caused by the bacterium Mycobacterium tuberculosis. It leads to 1.6 to 2 million deaths annually. Worse still, most of the bacterial strains are resistant to multiple drugs and their numbers are rising. The class of compounds called b-lactams, which also contains penicillin, is used to treat a variety of bacterial infections. But when it comes to tuberculosis it fails. Researchers have hit upon a combined dose of two compounds from the same class that shows promise in the unabated war on tuberculosis.

b-lactams work by arresting bacterial cell wall synthesis. In case of tuberculosis, the bacterial enzyme b-lactamase degrades the drugs and renders them ineffective.

Researchers from the Albert Einstein College of Medicine and the National Institutes of Health, US, have shown that a combined dose of two b-lactams--Meropenem and Clavulanate--is lethal to M tuberculosis. Clavulanate has the ability to block the enzyme. This leaves meropenem free to interfere with cell wall synthesis. Moreover meropenem is degraded five times slower than other b-lactams, giving the drug time to fully kill the cell.

Combinations of meropenem and clavulanate were added to cultures of three types of strains in the laboratory: drug-sensitive strains representing the major portion of tuberculosis bacteria, persistent strains and 13 different kinds of extensively drug-resistant strains. All the strains were killed within nine to 12 days. "The uniform activity of the two drugs against the various strains suggest this combination could be useful in the treatment of tuberculosis," said the researchers in the study published in the February 27 issue of Science.

Although both clavulanate and meropenem are drugs approved by the Food and Drug Administration, US, there are reports of side-effects. Meropenem causes diarrhoea, nausea and headaches while clavulanate causes jaundice and acute hepatitis. Clinical trials of the combination have been proposed on 15 patients around mid-2009 in South Africa due to the high prevalence of infections there.

For a decade now no new medication has hit the market. "Due to harmful side-effects, many compounds do not make it to production," said Anil Tyagi, head, department of biochemistry, Delhi University. Rifampicin, a semi-synthetic drug, was introduced in 1967. It is still being followed and has been the last effective medication.

The other hurdle is lack of funds. The Global Alliance for TB Drug Development was formed in 2000 to develop a new tuberculosis drug, supposed to hit the market in 2010. A team assessing their strategy said that the alliance might face a shortage of US $100 million and meeting the 2010 deadline seems unlikely.