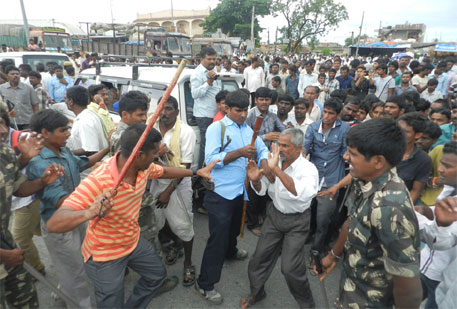 A farmers’ protest against erratic power supply turned violent in Narsingi in Telangana’s Medak district on August 4. In the clash between police and farmers, as many as 14 persons were injured.

Farmers from about eight villages gathered at Narsingi and blocked the National Highway 44, demanding seven hours of uninterrupted supply of power since khariff season has already set in and they have to water their crops using pump sets. The road was blocked for about two hours. When repeated appeals of the police not to block the traffic went unheeded, the police resorted to lathicharge and ten farmers got injured. The provoked protesters started pelting stones at the police, as a result of which four police personnel got injured.

Telangana lacks proper irrigation facilities and most of the farmers in all the 10 districts of the state depend on bore wells for agricultural operations. The state is going through a power shortage and power supply is erratic. Rural areas in the state are facing about 10 hours of power cut daily.

Farmers have been protesting for the past one month and venting their anger on the staff at the power substations.

Chief Minister K Chandrasekhar Rao and Irrigation Minister Harish Rao have directed the district administrations to ensure six hours power to farmers. The chief minister has lodged a strong protest with the Centre against Andhra Pradesh for “depriving Telangana of power” at a time when the farmers in the state need power the most. He has pointed out that Andhra Pradesh has reduced its power generation at two thermal power plants by 710 MW, which in turn has affected Telangana. Under the Andhra Pradesh Reorganisation Act 2014, the power generated in the states should be shared between the states in the ration 54:46. He has alleged that Andhra Pradesh is violating this agreement.