Telecom in southeast Asia hit after earthquake in Taiwan 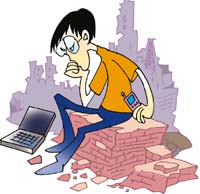 Telecommunications in Southeast Asia was badly affected after an earthquake hit southern Taiwan on December 27, 2006. Fixed-line and mobile international telephone connections were largely back on line two days after the quake, but officials warned that it could take several more days before Internet access across much of Southeast Asia returned to normalcy.

A technician in Singapore said that the speed of the repair would depend on how quickly the repair crews found the severed ends of the cables, some of which were broken in several places.