Yet another building collapses amid allegations of illegal modifications; number still trapped unknown 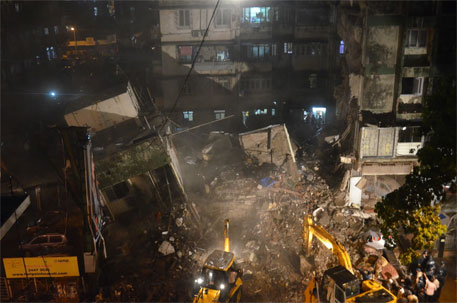 In yet another case of building collapse, 10 people were killed and six seriously injured when a six-storey residential building on Cadell Road in south central Mumbai came crashing down around 8 pm on Monday night. The incident occurred on a day when suburban Mumbai witnessed highest rainfall for the month of June in ten years.

At least five teams of the Mumbai Fire Brigade and one team of the National Disaster Response Force (NDRF) are still conducting rescue operations at the site. The possibility of the death toll rising has not been ruled out by the city’s civic officials.

In April this year a residential building in Shilphata near Thane in Maharashtra collapsed killing 74 people and injuring another 64  – one of India’s biggest building disasters of recent times.

No clear estimate is yet available on the number of people trapped inside the debris. More than 10 residents trapped in the part of the building that was left standing were rescued by the fire brigade late on Monday night. Only one young woman was rescued alive from the debris. The family of noted criminal defence lawyer Rizwan Merchant-mother Tohra Merchant (78), wife Asifa Merchant (50) and son Farhad (12)-are among those dead. The bodies of Ziba Hamin (16), Anam Danish Mittani (12), and Mariam Mittani (7) were recovered this afternoon. As rescue operations continue, the death toll is set to rise further.

The kin of those not yet found congregated on the periphery of the site, distraught. “Four children from our family are stuck inside the debris and we are extremely concerned for their safety,” says M K E Memon, a relative of a family that lives in the building.

Soon after the incident, unconfirmed reports began emerging about supposed illegal alterations made to building which may have caused it to collapse. These modifications were allegedly done for a large car showroom – Fortpoint – which occupied the ground floor. Several cars of the showroom were damaged as well.

Mayor Sunil Prabhu briefly visited the site. When asked about the alleged illegal construction, he could not confirm the information but said all these issues need to be looked into. Nitin Sardesai, a local member of the legislative assembly, said he was unsure about the legality of the building. “The building was certainly not included in the MHADA’s annual dangerous buildings list of cessed buildings for this year,” he added.

Amid the chaos, corporation officials refused to comment on anything but the ongoing rescue operations. They were shocked at the collapse of the building, and claimed that it was neither illegal nor dangerous.

Maharashtra Housing Area and Development Authority (MHADA) declared 16 buildings in Mumbai as dangerous this year, many of them in south and south central Mumbai. Nine of these buildings were in the same list last year as well.