Government ignores apex court order to clean up creek, one of the worst sites of industrial pollution in Thailand 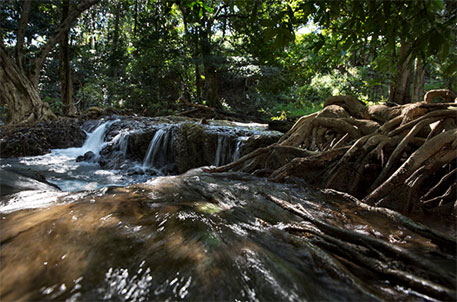 The Thai government has turned a blind eye to the problems of residents of Lower Klity Creek village in Kanchanaburi province in the western part of the country. Klity Creek is known to be one of the worst sites of industrial pollution in Thailand. It is threatening families in the village with serious and irreversible health problems, including development problems, mental disabilities and even blindness in some cases, as they are exposed to lead through water, soil, fish, and vegetables. Lower Klity Creek is home to about 400 ethnic Karen people, most of whom are farmers of rice, cassava, and vegetables.

Earlier, on January 10, 2013, the supreme administrative court of the country had ordered the Thai government to clean up Klity Creek. However, even two years later, the government has failed to clean the creek.

Non-profit Human Rights Watch (HRW), in its recently-released 32-page report, describes how the Thai government has failed to clean the creek in 16 years.

The news of the creek getting contaminated by lead first surfaced in 1998. A government medical team at that time visited the village and claimed everything was fine though residents were battling several illnesses.

A lead-processing factory was being run in 11 km upstream of Lower Klity Creek. The factory was run by Lead Concentrate (Thailand) Co Ltd. The factory, which began operations in the mid-1960s, was ordered to shut down in 1998. But its toxic legacy remained and kept haunting the village. Residents suffered the symptoms of chronic lead poisoning, such as abdominal pain, fatigue, headaches, and mood changes.

Even today, some of children in the village have severe intellectual and developmental disabilities. The Thai public health authorities have advised individuals in the village to stop consuming water, fish, and aquatic animals from the Creek.

Holding Thailand’s Pollution Control Department responsible for “delaying” cleaning of the creek, the supreme administrative court had ordered the department to pay a total of nearly four million baht, or US $125,000, in compensation that would be distributed among the 22 plaintiffs who had fallen prey to lead contamination in the Creek. In a historic judgment, the court had also ordered the government to clean up the creek.

The government, however, pressed for natural rehabilitation, which could take from between 50 to 100 years, Arpa Wangkiat, College of Engineering Rangsit University told HRW.

Children bear the brunt
The most sensitive targets for lead toxicity are children’s developing nervous systems, the hematological and cardiovascular systems, and the kidneys. Some residents told HRW that development of their children is slow.

Pregnant women and children are particularly vulnerable to lead poisoning. In pregnant women, it can cause premature birth, low birth weight, or damage the foetus’ developing brain.

Inadequate medical attention
Despite knowing the hazardous effect of lead in the creek, the government response to confirmed lead exposure has been inadequate, finds HRW. In 2000, a non-governmental organisation, the Karen Studies and Development Center and later the Ministry of Public Health, arranged treatment for lead poisoning for some individuals, especially with elevated blood-lead levels. Experts recommended chelation therapy when a child is found with a test result of greater than or equal to 45 micrograms per decilitre of lead in blood, but not lower because at lower levels chelation is ineffective. Chelation therapy is a medical procedure that involves the administration of chelating agents to remove heavy metals from the body.