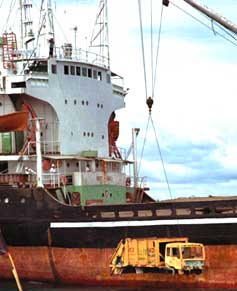 Thailand has dumped at least 189 old garbage trucks off its southern coast, in a bid to build an artificial reef to lure fish for local fishermen. The trucks, once used to collect refuse in Bangkok, were dropped into the Gulf of Thailand, about 5.5 km from the southern province of Pattani.

The move, in June last week, was to comply with a project initiated by Thailand's queen in 2002, under which everything from concrete pillars to old railcars have been dumped at 47 designated sites in the waters of southern Thailand. According to fishery department officials, following the activity, the number of species living around these artificial reefs have gone up to 43 from 15. Officials also say that the reef will protect shallow-water fishermen from high waves. However, environmentalists are not appreciative and say the dumped garbage is polluting seawater.