Thais go on logging, despite ban

A UN ban on export of hardwood from Cambodia notwithstanding, Thai loggers continue to exploit loopholes and carry wood across the border. 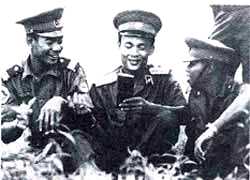 OPERATING in defiance of a UN Security Council embargo on the export of logs from Cambodia effective from the new year, Thai loggers are sending hundreds of lorries loaded with tropical hardwood over the border to Thailand. The UN has also banned the supply of petroleum products to the Khmer Rouge faction in Cambodia for failing to honour a UN-sponsored, ceasefire agreement that is part of the political settlement envisaged for Cambodia.

Most of the illicit logging in Cambodia is being carried out by Thai loggers largely in Khmer Rouge-controlled border areas. Corrupt Cambodian officials are reportedly letting the trucks through. But they deny any knowledge of the UN ban. Besides not having any real enforcement power, the UN is handicapped further because its ban only covers raw, uncut logs, and thousands of sawmills have sprung up in Cambodia to exploit this loophole. A Western analyst in Bangkok commented, "The only thing the ban would do is to change the pattern of commerce rather than the commerce itself."

Last November, the Security Council had endorsed a move by Cambodia's Supreme National Council (SNC) to halt timber exports despite objections from the Khmer Rouge. The SNC ban was aimed at embarrassing Thailand into ending its lucrative trade with the Khmer Rouge, as exemplified in a UN documentary, which showed scenes of ecological destruction carried out by Thai companies in Khmer Rouge-controlled western Cambodia.

The embargo on log exports and the ban on import of petroleum products, it is hoped, will force the Khmer Rouge into joining the peace process and participating in the elections scheduled for May in Cambodia. But it is doubtful whether the Khmer Rouge will suffer much even if the ban could be enforced, because Thai officials, too, have been ineffective in policing the border.

Since the ban was imposed, Thai loggers have chopped down thousands of trees in a frenzy of clear-felling. The sight of the resultant tree graveyards led UN military observer Major Paul Wenck to complain, "This is terribly sad."