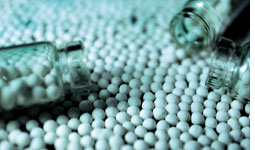 thalassemia patients who undergo expensive treatment to remove extra iron from their system may now take to homoeopathy. Scientists have found a homoeopathic remedy that is inexpensive and without side-effects. The remedy, they say, lessens the frequency of blood transfusions.

Thalassemia is caused by a defect in genes that code for haemoglobin. It leads to premature death of red blood cells, which results in excessive iron accumulation. Iron overload is the cause of most mortality cases. For treatment, foetal haemoglobin is usually reactivated through drugs. It transports oxygen from the mother's bloodstream to the foetus, and gets replaced by adult haemoglobin within 12 weeks of birth.

"Our treatment led to a rise in the levels of foetal haemoglobin," said Anisur Rahman Khuda-Bukhsh, the lead researcher from the department of zoology, Kalyani University, Kolkata.

The team administered several homoeopathic remedies to 38 thalassemic patients for three months in combination with hydroxyurea, which increases the concentration of foetal haemoglobin. They found that the therapy dropped ferritin levels in blood, which is the most commonly measured indicator of iron stores in thalassemic patients. It also reduced the inflammation of spleen; led to a rise in haemoglobin levels; and the blood transfusion demand was reduced by half. The study will be published in the forthcoming issue of Evidence-based Complimentary and Alternative Medicine.

The research is promising. "The medicines used by researchers have proven records of treating blood disorders," says Gautam Ash of the National Institute of Homoeopathy, Kolkata. Kanjaksha Ghosh, director of Institute of Immunohaematology, kem Hospital, Mumbai, says even if a partial solution is found in homoeopathy, it will be of great help.