That toaster could give you cancer 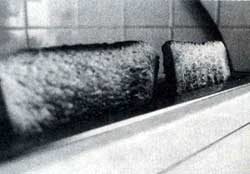 HOUSEHOLD electrical appliances may be convenient, but exposure to the electromagnetic fields (EMFs) they generate may not be safe. In fact, such EMFs and those generated by power transmission lines, radars and satellite equipment can even cause cancer, say scientists citing experimental results. But other scientists are not convinced and claim experimental data does not show a clear relation between EMFs and cancer.
EMFs can alter the interval of human heartbeat and there is enough evidence to show that varying magnetic fields can stimulate bone growth. But among the biological functions investigated in EMF studies on humans and animals, those involving the nervous system have shown greatest consistency. The most quoted is the EMF-induced change in the synthesis and release of melatonin, a hormone that boosts the immune system and natural killer-cell activity. The hormone's greatest importance lies in its ability to fight off various kinds of cancers (Science, Vol 258, No 5089).

Recently, some researchers found the expression of genes was above normal in animal cells exposed to EMF. But though these changes have a direct bearing on how normal cells become cancerous, they are small and inconsistent.

The EMF-cancer controversy was sparked off by a study in 1979, which found that children in homes exposed to relatively high EMF levels were two or three times more likely to develop cancer as children in homes exposed to lower EMF levels. The study, conducted by Nancy Wertheimer and Ed Leeper of the University of Colorado Health Center, suggested that high exposure to EMFs could increase the risk of childhood and adult leukemias, brain cancer, and male breast and prostate cancers.

The effects of EMFs on human biology have been known for about a century. A sceptic only needs to enter a sufficiently powerful magnetic field to feel the effects, one of which would be rings of light called phoshenes, produced by pressure on the eyeball. On staying longer, the person may experience involuntary muscle contractions. These phenomena arise from currents induced in the body by the changing magnetic field and depend on the frequency of the field.

But last October, an independent panel of US scientists found no convincing evidence in the published literature to support the EMF-cancer hypothesis. The panel, composed of scientists from the Oak Ridge Associated Universities (ORAU), opined against a major expansion of national research effort to investigate the health effects of EMFs.

On the other hand, the apologists of the idea, while conceding that evidence for EMF health-effects is limited, term the ORAU panel's conclusions as misguided and say it is foolish to undervalue the importance of something that could ultimately prove to be a significant public issue.

Interestingly, even while the ORAU report was in print, two Swedish studies produced the most convincing evidence yet that EMFs cause cancer. The two studies established a consistent dose-response relationship lacking in previous studies.

In the more famous study, Anders Ahlbom and graduate student Maria Feychting of the Karolinska Institute, Stockholm, linked 39 cases of childhood leukemia to EMF exposure from power transmission lines. They found the closer the children lived to the power lines -- and therefore the higher their exposure to EMF -- the more likely they were to have leukemia.

Ahlbom's was the most convincing study since the one done by Leeper, which showed some link between EMF and cancer in humans living close to EMF sources. Similar studies on workers such as electricians, who are at a higher risk of EMF exposure, are few. But some occupational studies suggest increased likelihood of breast and prostate cancer.

The sceptics, however, are not impressed. They point out that while Ahlbom shows a "weak" correlation between leukemia and the strength of EMFs as calculated from historical data, he fails to link leukemia to present-day measurements of EMF in homes of children with leukemia.