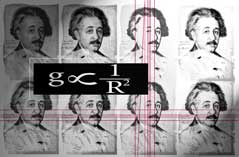 gravity pulls together objects of all sizes. It's easily observable in case of planets and other celestial bodies that are spaced wide apart but its difficult to observe its effects on minute masses that are kept close. Scientists at the University of Washington, usa, have verified the working of the Newtonian force between masses separated by as little as one millionth of a metre.

Newtonian theory holds valid for most situations that we come across in our daily lives. It is used to predict the motions of planets and stars. Newton calculated that the force between masses reduces in proportion to the square of the distance between them. One might ask -- why do we need to test the theory at small distances? Some recent offshoots of string theory dispute the mathematical relation at small distances. String theories promise to unify the four known types of forces in one framework. But to be consistent, they also require at least six extra spatial dimensions beyond our well-known three space dimensions. These dimensions are curled up in a way that makes them too minute to be invisible under everyday conditions. Lately, several scientists have developed theories in which these extra dimensions are really not that small and some of the extra dimensions can extend as far as a fraction of a millimetre, which is relatively a large distance.

This has grave implications for Newtonian theory. With two 'large-sized' extra dimensions the inverse square law of gravity will be modified and the force between two masses would decrease as the fourth power of the distance between them.

To test this idea, researchers experimented with a vacuum chamber having a small, perforated, metal ring suspended inside from a torsion pendulum. A torsion pendulum is basically a twisting pendulum. A slowly rotating perforated disc was placed below the metal ring. The disc rotated in such a way that the gravitational force aligned the holes ten times per revolution. Underneath the perforated disc was another rotating disc with holes aligned differently. The pendulum had a mirror attached to it on which a laser light was shone. This allowed the scientists to detect the motion of the ring in response to gravitational attraction between the discs. The scientists took care to shield the set up from all other disturbances. They observed the results when the ring is suspended at various heights from 200 micrometers to five millimetres and found the results consistent with Newtonian theory (Physical Review Letters , Vol 86, p1418).