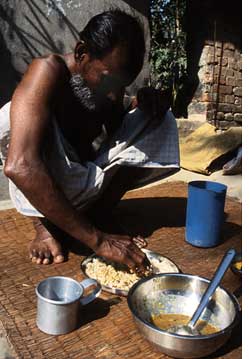 Study tracks how the toxic element enters rice through soil

studies have shown rice as a major exposure route for arsenic in humans. A new study has revealed why rice is particularly efficient in accumulating arsenic from soil and how to prevent such accumulations. To explain why rice has an affinity for arsenic compared to other cereal crops, the researchers examined the role of two protein transporters--Lsi1 and Lsi2. Known to transport silica (in the form of silicic acid) into plants, these transporters belong to a family of proteins that form pores in a biological membrane.

The study said that while Lsi1 facilitates entry of arsenic from the soil to the roots, Lsi2 facilitates its entry from the roots to the shoot and grain.While both the proteins (Lsi1 and Lsi2) mediate transportation of silicic acid from the soil to the shoots via the roots, in the absence of silicic acid, they showed preference for arsenic, explained the researchers in the study published online in the Proceedings of National Academy of Sciences (July 14, 2008).

For the study, the researchers compared arsenic accumulation between wild variety of rice and their mutant varieties where genes responsible for Lsi1 and Lsi2 protein transporters were knocked out. In the mutant variety where only Lsi1 was removed, arsenic in the shoots and roots was 71 per cent and 53 per cent lower than the wild variety. When Lsi2 was knocked out, arsenic in the shoots was 75 per cent lower relative to the wild variety of rice. When researchers grew mutant and wild varieties in the field, mutant varieties had 13-19 per cent lower concentrations of arsenic than wild varieties. "Mutation in Lsi2 has much greater impact on arsenic accumulation in shoots and grain in field-grown rice than Lsi1 as the former is responsible for taking arsenic to grains and shoots," says Jian Feng Ma from the Research Institute for Bioresources at Okayama University, Japan, and the lead author.


When silicic acid was added to the medium, arsenic concentration in the wild-type shoots decreased significantly. "Since silicic acid and arsenic are transported by the same transporters, both of them compete for uptake. When the soil is rich in silica, the uptake of arsenic is reduced," Ma said.

Arsenic transport in rice roots shares the same pathway as silicic acid. This explains why rice is efficient in arsenic accumulation. "There are other crops that can accumulate arsenic. But the rate of absorption varies from plant to plant. Even within a race, different varieties have different accumulation rate," says S C Santra, professor at department of environmental sciences, Kalyani University, Kolkata. Arsenic poisoning affects millions worldwide and is very common in Bangladesh and West Bengal in India. "In both regions, rice is the major part of the diet," he adds.

For arsenic reduction, Ma suggests waterlogged conditions allow certain microbes to work on arsenite, a form of arsenic in soil, to release arsenic which is taken up by rice. These microbes work in anaerobic conditions. So growing rice aerobically in raised beds reduces its mobilization.

This process can decrease arsenic transfer from soil to grain, the researchers say. The other approach could be to create transgenic rice to avoid arsenic absorption.