At the spring meeting of the Materials Research Society, researchers for the first time showed what happens at the atomic level when a material bends 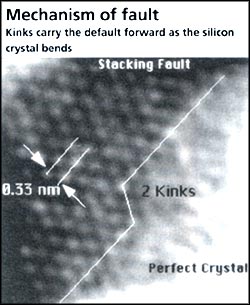 that the shape of a material can be distorted by applying sufficient force is well known. What is not very clearly understood are the processes going on at the atomic level which take place, when for instance, a piece of metal is bent. But now a group of scientists have reported seeing the initialisation of the process of bending in a silicon wafer.

John Spence and his team from the Arizona State University in Tempe, us, and the University of Koln, Germany, have captured the first images of atomic 'kinks'. In undistorted material, atoms are arranged in a regular crystalline lattice. But when the material is strained, clusters of atoms adopt a stacking arrangement different from the crystal. This is a kink which leads a fault through the bending crystal. The crystal atoms deform and rearrange as the atomic kink passes through ( Science , Vol 272, No 5261). The presence of kinks and their motion was predicted by John Hirth and Jens Lothe in 1959. Since then, high powered microscopic studies have observed the faults but this is the first time the details of the movement have been studied. To study the processes in detail, Spence and his collaborators needed a microscope of atomic resolution. For looking at the internal structure of the material, they used a transmission electron microscope (tem). A tem is very much like the familiar optical microscope, but uses a beam of electrons instead of light. The electron beam from a source (an electron gun) is focussed by a combination of magnetic and electrostatic lenses and is made to pass through a thin sample of the material. The electrons pass through with different speeds through regions of different densities, allowing the researchers to determine the positions of the atoms to a few angstroms (a hundredth millionth of a cm). The atoms in a fault deflect the electrons in different directions and filtering methods can be used to obtain their images.

Spence and his team used a silicon wafer, which was heated to 1000c and then bent to create faults. The bent wafer was cooled down while the bending force was still being applied. This resulted in the atoms in the fault getting stuck in their positions, since atoms cannot rearrange their bonds at room temperature. This wafer was now imaged extensively with a tem to obtain the positions of the faults and kinks. The wafer was again heated to 600c which resulted in the faults being set in motion. This was captured again as a series of tem images which could be used to get information on the speed of the kinks and the energy associated with them.

The work of Spence and colleagues not only confirms the theoretical models of how bending takes place at the atomic level, but could be of great utility in designing and testing of new, high performance materials.