The best of Indian science

In this and the following issue, DOWN TO EARTH presents a review of India's ten best scientific research projects. The selection is based on the opinions of eminent scientists from reputed institutions. Unravelling the mysteries of the cosmos through state-of-the-art telescopy, designing molecules to make synthetic drugs, making sophisticated lasers for medical and industrial applications and developing vaccines for birth control and diseases like leprosy are a few of the research frontiers Indian scientists are engaged in. The socio-economic benefits of some these endeavours are immense. For instance, lasers and synthetic drugs can endow India with self-reliance and a birth-control vaccine can go a long way in defusing the population bomb. In this issue, five of these projects are described. 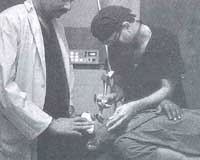 Indian lasers among the world's best

SOME OF the world's most advanced lasers, with a wide range of industrial and medical applications, are now being made in India mainly because of the work done at the Centre for Advanced Technology (CAT) in Indore.

The work at CAT is a continuation of research in lasers that was initiated at the Bhabha Atomic Research Centre (BARC) in Bombay in the 1960s. BARC successfully developed a semiconductor-based laser that was used to set up an optical communication link over a distance of 20 km.

CAT's lasers, besides being indigenous, are available at rates 50 to 70 per cent less than those made abroad. CAT director D D Bhawalkar cites the example of the 5 kw carbon dioxide laser, which costs Rs 75 lakh to import. But a similar version now being made at CAT costs Rs 25 lakh. Says Bhawalkar, "We want to make lasers easily accessible so that their vast potential in industry and medicine can be harnessed."
For this purpose, CAT is laying special emphasis on the commercial production of lasers. The centre has its own production unit, where lasers and related equipment are manufactured and supplied directly to users.

With large potential for lasers in medicine, CAT is not only developing equipment for medical use but also coordinating the training of hospital staff all over the country in their use. Says Bhawalkar, "It was decided to concentrate on medical applications of lasers so that the benefits of this technology can reach the common person."

Lasers are ideally suited for surgery because they cut tissue without causing bleeding or swelling and minimise post-operative trauma. A laser surgical system recently supplied to Choithram Hospital and Research Centre (CH & RC) in Indore is being used for ENT and gynaecological operations. This instrument is notable for its 7-joint articulated arm, designed at CAT. The tube from which the laser emerges can be swivelled around, making it easy to manoeuvre and direct the beam. The laser was tried out by a team of surgeons from Uzbekistan and found to be satisfactory.

Doctors at CH & RC are also trying out a nitrogen laser supplied by CAT for treating tuberculosis by beaming the laser on infected sites in the lungs. They found a marked improvement in the patients' condition after laser treatment and tests are now being conducted to confirm the findings.

Another medical instrument being designed at CAT is the laser endoscope, which enables a laser beam to be directed at an affected part through an optical fibre that is inserted into a patient's body without surgery. An important application of this is angioplasty, a procedure in which blockages in arteries are vaporised by the laser beam.
Lasers have numerous industrial applications such as welding, cutting, surface hardening, cladding (coating on a material) and alloying.

CAT has plans to supply several lasers to industrial firms. Says Bhawalkar, "I estimate our turnover from the sale of lasers to the domestic market alone to reach Rs 4 crore in a few years from now." In addition, CAT is negotiating with US and European agencies for exporting lasers.

Scientists at CAT are also pursuing an active programme of basic research in laser development, including interaction of laser radiation with various media and the nature of radiation produced by pulsed lasers. A pulsed laser emits light in periodic bursts, instead of continuously as is the case in conventional lasers. It can achieve much higher power as compared to one operating continuously because a pulsed laser releases the same amount of energy over a much shorter period.

A group led by U Nandy is working on the development of novel kinds of lasers that draw energy from chemical reactions instead of the conventional power supply. "Our eventual aim is to produce a laser that will derive its energy from stored chemicals so that electricity would not be required." S M Oak is leading a group studying non-linear optics using a laser. "Our work has applications in development of optical computers, in which signals are carried by light beams instead of electric currents," he says.

Such work is likely to ensure that CAT stays at the forefront of laser research. CAT is also playing a pivotal role in the implementation of the national laser programme, formulated by the Science Advisory Council to the Prime Minister, which aims at providing a major thrust to laser technology in India.