The bigger, the better 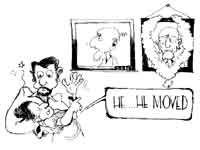 technologies used for digital watches and alarm clocks could be further developed to reduce the cost and power consumption of computer displays and to fabricate flat televisions. These televisions can be hung on a wall. A new type of light-emitting diode ( led ) being developed in the us could help develop much bigger screens than is currently possible.

led s are used to convert electricity into light. They provide the illuminated figures for digital displays on alarm clocks, fax machines, and care instrument panels. But a team of chemical engineers and physicists at the University of Rochester, usa , and the us -based Xerox Corporation has now developed led s that can emit a variety of colours, depending on the voltage applied to it.

The multi-colour led is created from sheets of two organic polymers known as polyphenylenevinylene ( ppv ) and polyquinoline, which conducts positive and negative charges respectively. ppv is synthesised as a granular powder but is dissolved in an organic solvent and then cast into sheets that are laid on top of a layer of polyqyinoline.

These layers are then sandwiched between a transparent electrode and a layer of aluminium metal. When a voltage is applied across the electrodes, the colour of light emitted by the polymer sandwich changes, whenever the voltage is changed.

The first consumer electronic appliances that could be made using this kind of screen technology, are hand-held devices such as personal digital assistants, mobile phones, calculators, and lap-top computers. The multi-colour led s require low power to run the system. They would make the batteries of laptop computers last much longer. The material used for making these led s is biodegradable and can be recycled.