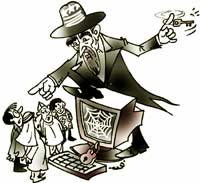 A decision by Washington, dc has effectively retained us control of the internet. Reneging on a previous pledge, the us commerce department has announced that the internet's 'root servers' would remain within the country. The servers in question are essentially massive directories: they match an internet address with a physical location and route a user's request accordingly. They also keep track of registered website names, as well as newly approved extensions -- such as org, gov or in. So, nearly all internet users utilise these servers regularly.

The servers' locations in the us were originally due to the country's funding of the internet's early infrastructure. But the us government had assured critics, several times in the past, that it would transfer control of the servers to an international body.

Now worries have arisen of a potential schism in how the internet operates. "Many governments are legitimately concerned that another country has ultimate control of their communications infrastructure and they could set up their own domain servers. This would make some parts of the internet out-of-reach to the others," warned Robert Shaw of the telecommunications watchdog, the International Telecommunications Union. The un's Information Society has recently called for democratisation of the internet. A showdown over the us decision is expected in November, when the society meets in Tunisia.