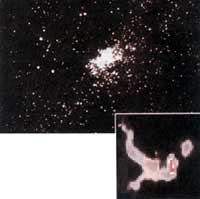 THE centre of the Milky Way, a wispy band of faint white light, has long been an object of speculation. There have been conjectures that there is a huge black hole at the centre. The latest reports, however, for the first time seem to confirm the existence of a compact, massive object, a few million times more massive than the Sun, at the centre. A Eckart and R Genzel of the Max Plank Institut, Garching, Germany, have reported the first direct observations of the proper motions of stars near the galactic centre (Nature, Vol 383, No 6599).

Their observations, which have been under way since 1991, were carried out by the 3.5 m-long New Technology Telescope in La Silla, Chile. Using specially-designed cameras and other instrumentation, they have determined the proper motions of 39 stars located between one and a tenth of a light year from the centre.

The Milky Way galaxy is lensshaped, with its centre towards the constellation Sagittarius, almost 33,000 light years away. The galaxy is about 15,000 light years thick at the centre and about 100,000 light years across. It contains more than 100 billion stars. The observations of the motion of stars in any system give us information regarding the mass contained in the system. If, for instance, the cluster of stars is bound (that is, if they are not moving apart), then their velocities are determined by the total mass, just as the earth's orbital velocity is calculated by the mass of the Sun.

However, the measurement of velocities of stars is not easy and we only have knowledge of what is called the line-of-sight velocity, since this is what we measure by using Doppler shift of the light emitted by the star. The normal assumption has been that other components of the stellar velocity are the same as the one observed, but this had never been proved.

Genzel and Eckart have measured the proper motion of the stars against a distant backdrop and measured for the first time the missing components of the stellar velocities. Their results indicate almost incontrovertibly the existence of a sizeable mass at the galactic centre, which is not visible. The mass is estimated to be about 2.5 million times the mass of the Sun. What is more intriguing is the fact that this mass is very close to a bright radio object called Sagittarius A*.

This is consistent with the hypothesis that the radio source is actually a disk of hot gas going into a black hole. If correct, this would make Sagittarius A* the largest black hole in the galaxy and confirm what theorists have believed for a long time, namely, the existence of a black hole at the galactic centre. High resolution measurements are underway and should provide us with more evidence in support of this tantalising idea.